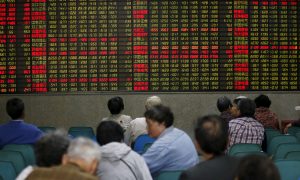 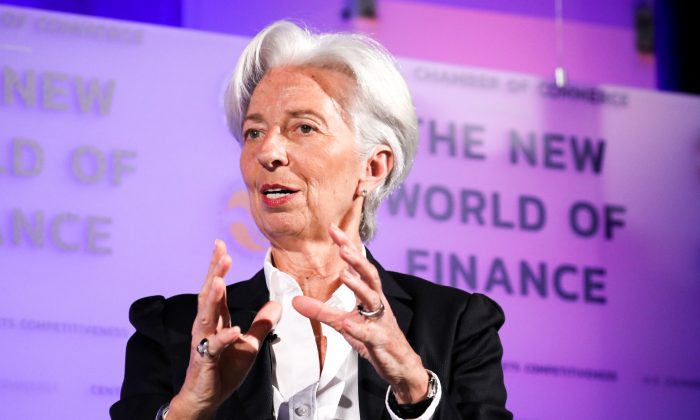 Speaking at the American Enterprise Institute, Lagarde defined trade as a “major growth engine” for the world economy. And any brakes on trade, she said, such as tariffs and nontariff barriers, would put a brake on growth.

Overall, the IMF estimates that U.S.–China tariffs—including those implemented in 2018—could cut global gross domestic product by 0.5 percent in 2020. This implies a loss of about $455 billion, larger than the size of South Africa’s economy.

Lagarde earlier warned that the global economy was at a “delicate moment.”

In its April report, the IMF projected the world’s economy would grow at 3.3 percent in 2019, a 0.4 percentage point downgrade to its forecast in October 2018. The organization predicts a 3.6 percent growth for 2020.

“Unfortunately, we’re seeing some materialization of these risks that we had identified a few months ago,” she said, adding that the newly proposed U.S. tariffs on Mexico were also of concern.

The major concern for IMF is that the policymakers are left with little space to maneuver with respect to both monetary and fiscal stimulus.

According to Lagarde, there are also other risks that are in the making, such as Brexit. The likelihood of the UK’s departure from the EU without a deal has gone up after three failures in getting approval in the House of Commons. A no-deal Brexit could happen this year at the end of October.

In October 2018, the IMF cut its global growth forecast for the first time since July 2016 due to slowing Chinese economic growth, the U.S.–China trade war, and financial worries in emerging markets. It announced further downward revisions in January and April.

However, the fragility in the world economy is “a little bit differently distributed than what we had assumed,” said Lagarde.

While first-quarter economic activity was disappointing in emerging markets, growth was stronger than expected in the United States, the EU, and Japan, she said.

Another stumbling block for the global economy is a significant rise in corporate debt levels and deterioration in credit quality prevalent around the world. According to Lagarde, corporate debt levels are so high that a sudden shift in financial conditions could lead to disruptive capital outflows from emerging markets.

The IMF on June 5 cut its 2019 economic growth projection for China to 6.2 percent from 6.3 percent, due to heightened uncertainty around trade tensions.

“Growth is expected to moderate to 6.2 percent and 6.0 percent in 2019 and 2020, respectively,” IMF Deputy Managing Director David Lipton said in a statement. “The near-term outlook remains particularly uncertain, given the potential for further escalation of trade tensions.”

Some additional policy easing would be needed, if trade tensions escalate further, Lipton said in the statement.

Trade will be a topic of discussion at the G-20 Leaders’ Summit in Japan late this month, according to Lagarde. And she said the IMF would present a report about the issue of trade imbalances around the world at the summit.

President Donald Trump said on June 6 that he would decide whether to implement new tariffs on at least $300 billion in Chinese goods after the G-20 summit.

“I’ll make that decision after the G-20. I’ll be meeting with President Xi, and we’ll see what happens. But probably planning it sometime after G-20,” Trump told reporters in France.

He also said China wanted “to make a deal badly.”

The G-20 summit marks the first opportunity for Trump and Chinese leader Xi Jinping to meet since their last gathering at the G-20 in Buenos Aires, Argentina, in late 2018.

Tensions escalated between the United States and China in early May after Beijing backtracked on commitments to deliver key structural reforms, and Trump raised tariffs on Chinese goods.

The recent trade tension led to a 14 percent drop in Chinese equities from their year-to-date peaks in April as the rise in conflict prompted the biggest capital outflow from Chinese equities in nearly four years. Chinese stocks saw net outflows of $2.6 billion and $2.8 billion for the weeks ending May 10 and May 17, respectively.