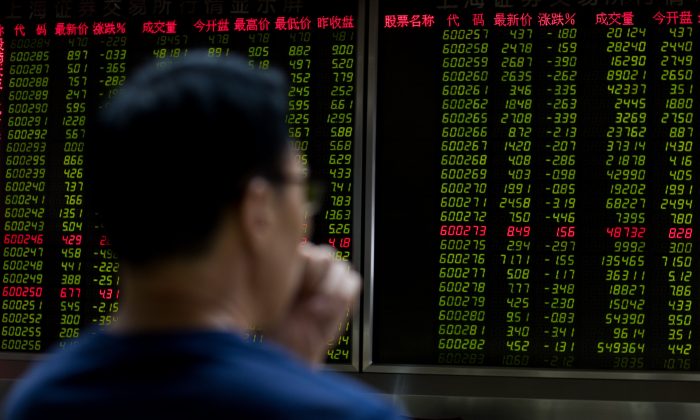 A man sits in front of a screen showing stock prices at a securities brokerage in Beijing on July 11. (Nicolas Asfouri/ AFP/Getty Images)
China Business & Economy

Since escalation of the U.S.-China trade war, the U.S. and Chinese stock markets have largely moved in opposite directions.

This curious dynamic underscores investors’ opinion in American and Chinese markets, and their respective underlying economic and financial forces.

There are some key factors buoying in U.S. stocks. A main reason is underlying fundamentals remain positive among U.S. issuers and analysts expect a strong second-quarter earnings season.

“In our view, even draconian measures should not greatly offset already strong U.S. corporate fundamentals,” JPMorgan analysts said regarding second quarter earnings, according to a CNBC report.

Another factor could be that most investors expect the U.S. to win the ongoing trade war. The U.S. imports far more goods than China imports from the U.S. And the stronger balance sheets of large U.S. importers can allow American firms to withstand effects of a prolonged tariff battle without sacrificing much in sales.

U.S. economic data continue to show strength. The economy added 213,000 jobs in June, which was higher than expected. The Federal Reserve gave a positive update on the state of the U.S. economy, in a “Monetary Policy Report” to Congress released July 13. “The U.S. financial system remains substantially more resilient than during the decade before the financial crisis,” the report noted.

The picture across the Pacific Ocean is far bleaker.

Last week, the U.S. Trade Representative’s Office proposed an additional 10 percent tariff on approximately $200 billion of Chinese imports, which deals a further blow to the prospects of Chinese exporters.

Negative sentiment is prevailing among investors. “We continue to believe that U.S.-China trade tensions are unlikely to be resolved soon and the uncertainty could cause further downside pressure on valuations,” Morgan Stanley Hong Kong analyst Laura Wang wrote July 11 in an update to clients.

This is also reflected in the currency markets, as the U.S. dollar to Chinese yuan (CNY) spot rate closed at 6.69 on July 13, trading above the People’s Bank of China’s fixing rate of 6.67.

Adding Fuel to the Fire

At a macro level, the trade war’s timing could not be worse. It has served as additional water spouts in already stormy seas for Chinese investors.

Chinese Communist Party (CCP) leader Xi Jinping has been growing his power in recent years. And within this power is a mandate to reform China’s domestic economy, including enacting unpopular measures designed to rein in excess credit and financial risk-taking. These actions include clamping down on shadow banking, reducing risk-appetite among the wealth-management and insurance sectors, and limiting local government debt.

But such deleveraging measures have slowed China’s economic growth and increased debt defaults.

China’s fixed asset investment growth, the chief driver of its economic expansion—encompassing real estate, construction, and industrial investments—has slowed to 6.1 percent year-over-year as of May 2018, according to Trading Economics. This metric is among the lowest on record, as China averaged 20.3 percent growth since 1996, with a high of 53 percent experienced in Feb. 2004.

Bond defaults are on pace to reach a record this year, which is something the CCP is expecting and carefully managing. But the recent trade war with the U.S. has put additional stress on dollar-denominated Chinese corporate bonds. Bloomberg reported on July 12 that average yield of Chinese dollar junk bonds have reached their highest levels since 2015 (bond yields are inverse to prices).

“China has the largest number of bad loans across these corporations that have been kept afloat by the government essentially,” JPMorgan Asset Management Fixed Income Strategist Oksana Aronov told Bloomberg TV on July 13. “So China has a significant bad loan problem and credit issue… and the tariff problem is not helpful there.”

Amid this backdrop, the tariff skirmish with the U.S. is becoming a serious problem for Chinese investors. The CCP has historically depended on market—and by extension, wealth—appreciation to appease Chinese citizens.

But as Chinese investor sentiment turns lower and more painful deterioration manifests, the CCP will find the going tough both internally and abroad.