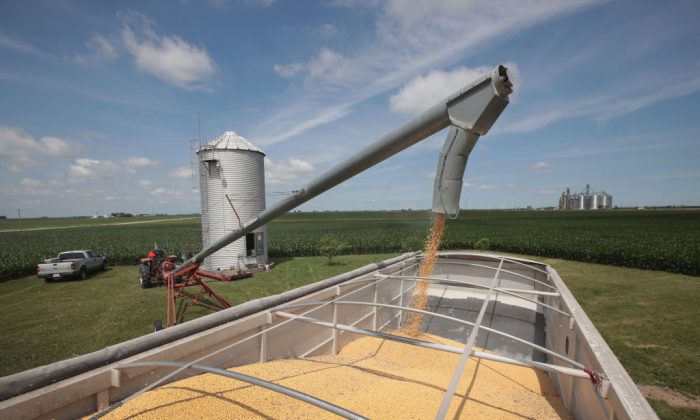 Farmer John Duffy loads soybeans from his grain bin onto a truck before taking them to a grain elevator on in Dwight, Ill., on June 13. China hit U.S. soybeans with retaliatory tariffs amid rising trade tensions between Washington and Beijing. (Scott Olson/Getty Images)
Politics

Trade War May Have Limited Impact on Midterms

Despite rising trade tensions, estimates of the risks of a China trade war on the overall economy may be inflated. Rising tariffs seem to be having little impact on the booming economy, say experts, and hence it’s hard to claim trade wars would affect the November midterm elections.

President Donald Trump pushed ahead on July 11 with plans to impose 10 percent tariffs on an additional $200 billion of Chinese imports, escalating the trade tensions with Beijing. The recent action sent a message to all trading partners that the United States is not backing away from its trade demands.

According to Michael Steele, political analyst and former Republican National Committee chairman, Americans will not see the real impact of tariffs until the second quarter of next year. Hence it is unlikely that trade tensions would affect the elections in November, Steele said on July 11 at an event hosted by Economic Innovation Group (EIG) think tank.

Trumps’ trade strategy is working both internationally and domestically, according to Steele.

Trump, as a New York real estate developer, knows there is always a point in the deal when the other side is desperate, and that’s where he is going to make a deal, he said.

Steele believes the United States has the upper hand in the negotiations with Europe and Asia.

“We will see who blinks first. My bet is there will be more blinking on the other side,” he said.

“On the domestic side, this is fodder for his base,” Steele continued. “They love him. He is a strong leader. He is the one who is pushing back on America’s being taken advantage of by NATO, European allies, on a host of issues from foreign aid to trade deals.”

Rep. Suzan DelBene (D-Wash.) criticized the Trump administration for having no clear strategy and end goal in its tariff policies. Rising uncertainty would soon put pressure on workers and small businesses, she said at the EIG event.

According to DelBene, the retaliatory actions have already started to affect the economy of her state, Washington. Tariffs on some agricultural products such as cherries and apples have more than doubled and even tripled, she said.

Farmers throughout the country are nervous, but they are not ready to switch parties yet.

“I don’t think rural America will suddenly flock to Democrats,” Scott Paul, president of Alliance for American Manufacturing, said at the EIG event.

The United States has the largest economy and the largest consumer market in the world, which provides the Trump administration a lot of leverage in the trade talks, Paul said. One out of five Chinese exports heads to the United States, and so it is an irreplaceable market for China, he added.

Paul believes the trade war will turn into something better for the United States in the end. He praised Robert Lighthizer, the United States trade representative and his efforts to end China’s anti-competitive practices.

“I do believe that Ambassador Lighthizer is a savvy negotiator who can achieve results,” he said.

The tariffs on an additional $200 billion of Chinese imports could take effect by the end of August after a public review process, according to a statement from the U.S. Trade Representative’s office. The proposed list of Chinese products includes apparel and clothing accessories, television components, refrigerators, and some other high-tech items, but excludes mobile phones.

“Unfortunately, China has not changed its behavior–behavior that puts the future of the U.S. economy at risk,” says the statement.

“Rather than address our legitimate concerns, China has begun to retaliate against U.S. products. There is no justification for such action.”

Although trade tensions may have limited effect on elections, a partial victory in the short-term may boost Trump’s popularity. Yet, at the current pace of trade negotiations, it is unlikely that the Trump administration will have a significant breakthrough before the mid-term elections, according to Steele.

The political conversation will switch from trade wars to more domestic-oriented issues like health care, going into the November elections, Steele said.

“There is a hard reality that’s going to be setting in this fall and that’s when insurance companies across the country announce their premium rates for the next year,” he explained.

He said there would be a 15 to 30 percent increase in insurance premium costs, which “will hit people right in their wallets.”

Trade tensions will be less of a factor, he said.