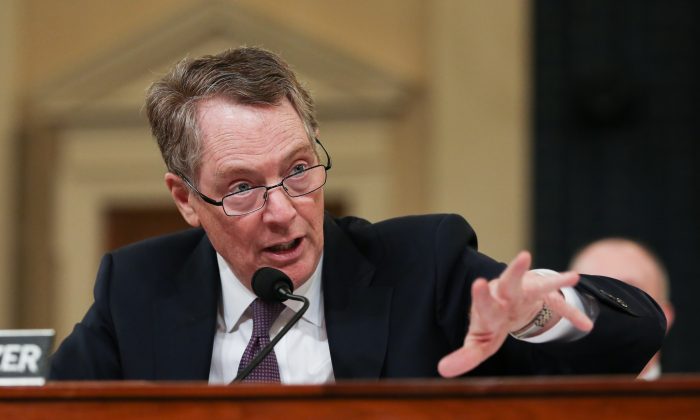 Trade Talks Progressing on US Demands for China to Make Structural Changes: Lighthizer

“We have engaged in a very intense, extremely serious and very specific negotiation with China on crucial structural issues for several months now. We are are making real progress,” Lighthizer told the House of Representatives’ Ways and Means Committee at a hearing on U.S.-China trade issues.

He also said that the U.S. delegation was focused on ensuring the enforceability of any trade deal reached between the two countries.

“If we can complete this effort, and again I say if, and can reach a satisfactory solution to the issue of enforceability … we might have an agreement that turns the corner in our economic relationship with China.”

The trade representative, however, said that “much still needs to be done” before an agreement can be reached.

Lighthizer is the lead U.S. negotiator in trade talks with Beijing as the world’s two largest economies work to resolve their differences in a trade dispute that has seen both sides impose tariffs on imports.

On Feb. 24, President Donald Trump announced that he would delay a planned tariff increase scheduled for March 2, citing “substantial progress” being made during talks that occurred last weekend. The Trump administration had planned to increase tariffs to 25 percent from 10 percent on $200 billion worth of Chinese imports if a deal could not be reached by March 1.

Trump also said that assuming additional progress is made, he may be meeting with Chinese leader Xi Jinping to finalize a deal at his Mar-a-Lago estate in Florida.

Reiterating previous statements by the president and the administration, Lighthizer said structural issues are fundamental to the negotiations, adding that the United States is making headway on those issues, contrary to what many media reports have suggested.

The United States has been pushing for China to address its cyber theft of U.S. intellectual property; forcing U.S. companies to transfer technology in exchange for access to the Chinese market; state subsidies for domestic sectors; and currency manipulation.

“Technology really is what separates us from the rest of the world,” Lighthizer said, adding that “if we make headway to stop this transfer of technology and this unfair trade by this trading partner, it’s going to have a huge impact in terms of jobs, and high-end jobs in America.”

The trade representative said that offers by China to purchase more U.S. products, such as soybeans and natural gas, would not be enough to resolve the conflict.

“The issues on the table are too serious to be resolved with promises of additional purchases. We need new rules,” he said.

Enforceability is critical to any trade deal, Lighthizer said, adding that a successful agreement would be “specific, measurable, and enforceable at all levels of government.”

He said an agreement would include obligations to be carried out by China’s government at the central, intermediate, and local levels, in addition to terms that would allow the U.S. administration to take unilateral proportionate action if China does not fulfill its commitments. A successful agreement would also include semi-regular meetings between the two sides at the director, vice-ministerial, and ministerial levels to review compliance.

According to Lighthizer, the pact’s enforceability is key because the Chinese regime has typically not fulfilled its promises.

“I can go through … many many examples” of the Chinese regime agreeing to end unfair trade practices, “and in very few cases have they actually kept their obligations,” he said.

Congress members from both parties were thankful of Lighthizer’s efforts, and expressed approval of the Trump administration’s tough stance against the communist regime’s unfair trade practices.

Lighthizer “has time and again … developed a vision that many of us on this committee will support vigorously,” said Rep. Richard Neal (D-MA), chairman of the Ways and Means Committee.

The administration “must hold out for a good deal, a structural deal,” Neal added.

Lighthizer pointed out that over the years, politicians from both sides of the aisle have recognized the problem of the Chinese regime’s trade abuses, including House Speaker Nancy Pelosi (D-CA), who has sounded the alarm over the regime’s actions for almost two decades.

“If this was not a bipartisan view, we would not be having the success that we are having,” Lighthizer said.