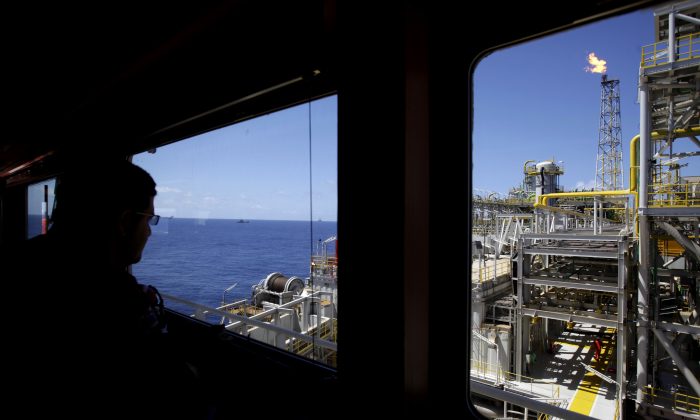 An oil worker looks out, over the Petrobras offshore ship platform over Tupi field in Santos Bay off the coast of Rio de Janeiro, Brazil, on Oct. 28, 2010. (AP Photo/Felipe Dana)
Business & Markets

PARIS—A slowdown in international trade could be a harbinger of a new recession for the world’s leading economies, a leading global policy organization warned Monday.

The Organization for Economic Cooperation and Development says trade figures are worrisome because the stagnating or declining rates of trade seen this year “have, in the past, been associated with global recession.”

In its world economic outlook issued Monday, the Paris-based group projected global trade growth at 2 percent this year, improving to 3.6 percent next year.

In only five years of the past 50 has global trade grown at 2 percent or less, and each time has coincided with a world economic downturn, said Angel Gurria, the OECD’s secretary-general.

“Trade should be growing at about double the speed of growth of the world economy because trade is always a locomotive,” Gurria said. Instead, the OECD predicted the world economy would grow 2.9 percent this year and 3.3 percent next year.

The group says that in contrast to two years ago, when sluggish trade was blamed on advanced economies, the fault now centers on emerging markets such as China. As China transitions from massive infrastructure investment and manufacturing toward consumption and services, commodity prices have fallen, hurting exporters such as Australia, Brazil, Canada and Russia.

New figures released Monday in China highlighted the extent of the downturn: the country’s imports fell by 18.8 percent in October from a year earlier, while exports shrank 6.9 percent.

Ahead of next week’s G-20 meeting of leaders of the world’s major economies, Gurria called on governments to roll back protectionism, strengthen smart public investment, and carry out structural reforms including improvements to education, taxes and labor markets.

The OECD is made up of 34 of the world’s most developed countries and advocates for policies to promote growth, education and social welfare issues.

In a nod to the upcoming COP 21 global climate talks in Paris, the report says “action is needed now.” The OECD urged leaders from nearly 200 countries gathering for the talks aimed at limiting emissions that cause global warming to not use economic weakness as an argument for policy inaction.

The organization also touched on European divisions over how to handle the surge in migrants, saying a collective approach and the right policies would not only lighten the economic burden of the newcomers but would benefit host countries.

“In the medium- and long-term, given the aging in our societies and given the mismatch in skills vis a vis what the market it requiring it will still be a net positive for our economies,” Gurria said.