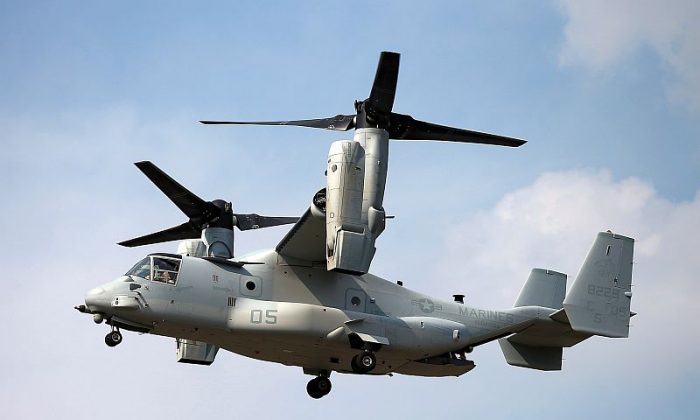 Purchasing one less V-22 Osprey Helicopter, a program so troubled that Dick Cheney called it a “turkey,” would save $90 million, write Lawrence Korb and Miriam Pemberton. (Win McNamee/Getty Images)
Opinion

Retired Gen. David Petraeus and Michael O’Hanlon are correct that we should protect funding for the State Department and the Agency for International Development, because doing so enhances our national security. Their comments are in line with those of former Secretary of Defense Robert Gates, who made this point several times during his time in office.

But neither Gates nor Petraeus and O’Hanlon are willing to reduce defense spending in order to provide additional funds for the soft power supplied by State and USAID. Gates specifically ruled out shifting funds from the defense budget, and Petraeus and O’Hanlon want to cut entitlement spending and raise taxes to ensure that those two agencies are adequately funded.

Given that we now spend more on defense, in real terms, than we did during the Cold War and that bipartisan groups like Bowles-Simpson and Domenici-Rivlin have recommended cutting up to $1 trillion from defense over the next decade, it would seem logical that funds could be shifted from the DOD budget, which is 10 times larger than State and AID, so that we could not only not cut that budget but actually increase theirs.

For example, purchasing seven fewer F-35 Joint Strike Fighters, a troubled program that is 70 percent over budget, would save $1.7 billion this year and allow the administration to avert the cuts it made to the Global Fund to Fight AIDS, Tuberculosis, and Malaria. Purchasing just one less V-22 Osprey Helicopter, a program so troubled that Dick Cheney called it a “turkey,” would save $90 million and allow the State Department to train Foreign Service officers and diplomats how to cooperate better with international organizations.

Purchasing one rather than two Virginia Class submarines, a vessel ill-suited to fight today’s asymmetrical wars, would save $2.6 billion, more than enough to fund the U.S. commitment to international peacekeeping forces.

In order for the president and Congress to make these trade-offs, the U.S. government needs to develop a unified national security budget. Until we do, agencies like State and USAID, which as Petraeus and O’Hanlon acknowledge, generally lack a strong constituency, will continue to receive less than they need to project soft power and enhance our national security.

Lawrence J. Korb, a senior fellow at the Center for American Progress, served as an assistant secretary of defense in the Reagan administration. Miriam Pemberton is a research fellow at the Institute for Policy Studies. Originally published in Politico.