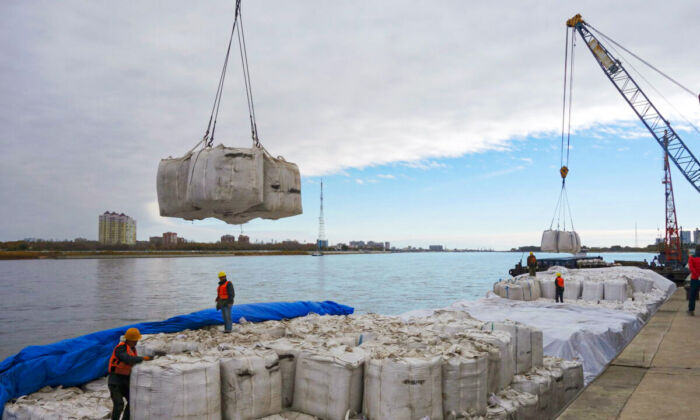 Workers stand near a crane unloading sacks of imported soybeans from Russia at Heihe port in Heilongjiang Province, China, on Oct. 10, 2018. (Stringer/Reuters)
Thinking About China

Trade Is Surging Between China and Russia

China and Russia are drawing closer and rapidly. That was happening even before the West imposed sanctions on Russia over the invasion of Ukraine.

But now that China seems willing to take at least some of what Russia may no longer be able to sell in Europe and elsewhere, bilateral trade between the two nations should accelerate, though it is doubtful that China will make all the purchases that Russia needs.

On one side, Beijing should be pleased with the situation, painful as it is for its northern neighbor. For one, the Chinese economy can use the Russian energy that once went elsewhere, at least some of it, as well as Russia’s agricultural products and other raw materials.

For another, giving Russia a trade outlet thwarts the United States, at least to a degree, and Beijing always enjoys that sort of thing. Most important to Beijing, the pattern could over the long run turn Russia into a kind of tributary state to Beijing.

Trade between Russia and China has indeed shown an impressive growth to date. It has expanded by 50 percent since 2014, and grew 36 percent in 2021 alone. Bilateral trade between the two countries has reached the equivalent of $146.9 billion.

When Chinese leader Xi Jinping met with Russian President Vladimir Putin at the recent Winter Olympics, they laid out a plan to increase their bilateral trade to the equivalent of $250 billion by 2024, a growth rate of about 20 percent a year from today’s levels.

To serve existing trade and the planned growth, Russia, with $50 billion in Chinese loan financing, built the 2,540-mile East Siberia Pacific Ocean (ESPO) pipeline. For future energy sales in China, Russia will add to the existing the Power of Siberia pipeline a Power of Siberia 2 pipeline, also with Chinese loan financing. With these decisions—both the construction and the financing—Russia has clearly tied itself closely to Beijing’s Belt and Road Initiative (BRI, also known as “One Belt, One Road”).

Similar relative proportions apply to natural gas. Since China imports some 11 million barrels of oil a day, and considerable natural gas as well, it could theoretically absorb any amount that Russia fails to sell under the new sanctions regime.

But it is not that simple. Because China now imports only about 2 million barrels of Russian oil a day, fully accommodating Russia would involve more than a three-fold increase in purchases of Russian oil. Instead of the 15.5 percent of energy imports China presently gets from Russia, the proportion would have to rise to almost 55 percent. Not only would that impose on China’s already strained supply chains, at least for a while, but Beijing might be reluctant to alienate existing supply relationships.

On top of this are considerations of China’s position in the world. The U.S. State Department has warned China not to help Russia avoid sanctions. That might give pause, but so also does the fact that half the world’s economies, most of the buyers of China’s exports, have joined the sanctions regime, and Beijing has no desire to get on the wrong side of such an important, and dominant, group.

However much this relationship develops, it would seem to be more beneficial to China than to Russia. Provided that China can avoid alienating existing energy and raw material suppliers and its other trade partners generally, its economy, after a period of adjustment, would give up nothing to enlarge the relationship.

What is no doubt more appealing to Beijing is that Russia, to build the necessary infrastructure would become even more deeply obligated to Chinese finance, as is true of most nations that have opened themselves to China’s BRI.

In time, the relationship could progress to a point where a deeply indebted and dependent Russia would effectively become part of China’s sphere of influence, a mere tributary state to Beijing—a bitter irony for Putin who initiated his relationship with China (and his land grab in Europe) to secure for Russia the status of a “great power.”