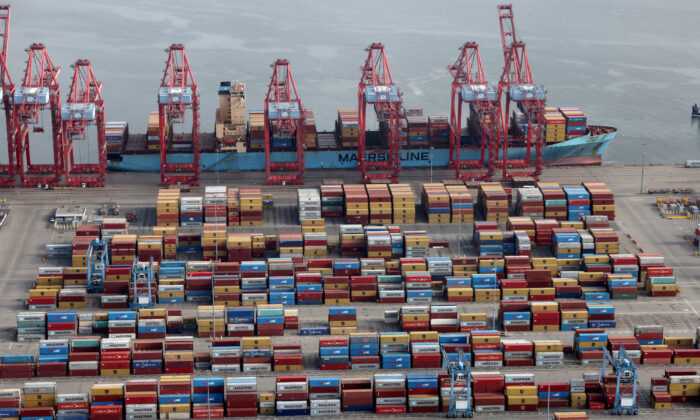 Shipping containers are unloaded from a ship at the Port of Los Angeles complex, in Los Angeles, Calif., on April 7, 2021. (Lucy Nicholson/Reuters)
Economy

The U.S. trade deficit narrowed sharply in June to its lowest level in six months as exports hit a record high, a trend that could see exports adding to gross domestic product (GDP) in the third quarter after the economy contracted for two consecutive quarters this year, meeting the rule-of-thumb definition for a recession.

The U.S Department of Commerce said on Aug. 4 that the trade deficit fell 6.2 percent, to $79.6 billion, as imports inched down while exports soared.

Trade was the only bright spot in the U.S. economy in the second quarter, adding 1.43 percentage points to GDP after being a drag on output for seven straight quarters.

Two negative back-to-back quarterly GDP prints are a common practical definition for a recession, according to numerous experts and economists.

Formally, however, recessions in the United States are declared by a committee of economists at the National Bureau of Economic Research (NBER), who use a broader definition than the two-quarter rule that considers a range of indicators—including employment—which has continued to grow, though there are signs of labor market cooling.

Meanwhile, a growing number of U.S. corporations have announced hiring freezes or layoffs, with the number of Americans filing for unemployment insurance rising by 6,000, to 260,000 last week, according to the Department of Labor (pdf).

Meanwhile, the Biden administration has seized on the NBER’s criteria for declaring a downturn, insisting that the economy isn’t in a recession, chiefly citing labor market strength.

Ryan McMaken, a senior editor at the Mises Institute, said in a recent note that despite the White House pronouncements that the economy isn’t in a recession, a measure known as the Misery Index suggests otherwise.

“Apparently, as long as the NBER has not yet issued its opinion on whether or not the U.S. economy is in recession, the White House is going to double down on the assertion that the economy is in fine shape and people should really stop complaining,” McMaken said.

“Although the White House seems to believe that things are pretty OK, the U.S.’s Misery Index suggests they’re not,” he added.

The Misery Index, which is a composite of the unemployment rate and Consumer Price Index (CPI) inflation, rose in June, to a reading of 12.5. Higher readings suggest more economic pain.

“That’s the highest since September 2011, when the U.S. economy was experiencing a time of very weak job growth and economic growth following the Great Recession,” McMaken said.

The June reading for the Misery Index is also higher than the 11.4 notched during the 2007–09 recession.

Analysts have pointed to other recessionary signals, such as yield-curve inversion.

Another closely watched yield spread—between that of the three-month and 10-year Treasury notes—has plunged in recent months, to just above zero, hitting 0.04 percent on Aug. 1, though it inched back up to 0.21 percent as of Aug. 3.

All eight of the last U.S. recessions were preceded by an inversion—or dip into negative territory—of the three-month/10-year yield curve.

Nick Reece, vice president, Macro Research & Investment Strategy at Merk Investments, told The Epoch Times in an emailed statement that the NBER is unlikely to declare a recession.

“Gross domestic income was positive in the first quarter, jobs have been added every month throughout first and second quarters, and it likely wouldn’t meet their significant depth consideration,” Reece said.

“Thus, real GDP could decline by relatively small amounts in two consecutive quarters without warranting the determination that a peak had occurred,” Reece explained.

“Looking ahead, the risk of recession is still elevated,” he continued, adding that he thinks the odds that the U.S. economy will tumble into a recession over the next 12 months are at least 40 percent.