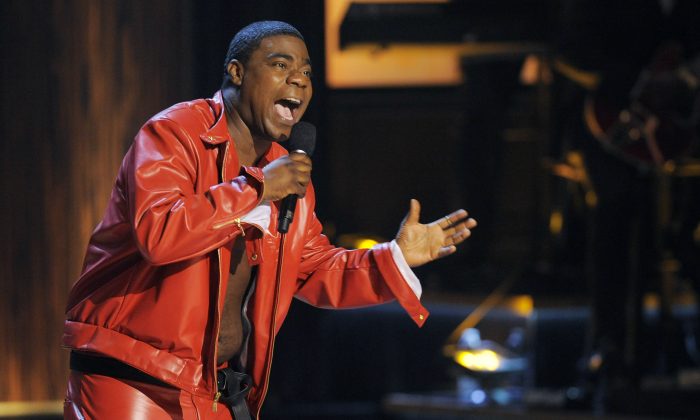 FILE - In this Nov. 3, 2012 file photo, comedian Tracy Morgan performs at "Eddie Murphy: One Night Only," a celebration of Murphy's career at the Saban Theater in Beverly Hills, Calif. Morgan is recovering but is expected to remain hospitalized for several weeks after having surgery on a broken leg suffered in a chain-reaction crash on the New Jersey Turnpike early Saturday, June 7, 2014, that left two others critically injured and one dead. (Photo by Chris Pizzello/Invision, File)
Entertainment

A number of death rumors have been going around on social media this week, saying comedian and actor Tracy Morgan died in a car crash. Morgan is in critical but stable condition.

A spokesperson also commented on Monday that Morgan will not get his leg amputated after the accident.

WASHINGTON (AP) — A New Jersey highway crash that severely injured Tracy Morgan and killed another comedian is drawing attention to the dangers of tired truckers just as the industry and its allies in Congress are poised to roll back safety rules on drivers’ work schedules.

A proposed change to federal regulations backed by the trucking industry and opposed by safety advocates and the Obama administration would effectively let drivers put in as many as 82 hours a week behind the wheel. The current limit is either 60 hours or 70 hours a week, depending on the kind of company employing the driver.

The change was added to a transportation spending bill by a Senate committee last week.

Nearly 4,000 people die in large truck crashes each year, and driver fatigue is a leading factor, according to the Federal Motor Carrier Safety administration. The rate of fatal crashes involving large trucks rose from 1.03 per 100 million vehicle miles traveled in 2009 to 1.29 in 2012.

The trucking industry has been sparring with safety advocates and unions over driver hours for two decades, including several trips to federal court. Safety advocates, while extending their sympathies to Morgan and the family of comedian James “Jimmy Mack” McNair, who was killed in the crash, said they hope that because a celebrity was involved in the accident it will boost their cause.

“This is a major moment really to stop the trucking industry,” Joan Claybrook, a former head of the National Highway Traffic Safety Administration, told reporters in a conference call. “It seems no matter what we do in terms of pushing to get safer trucks on highways, the trucking industry uses its clout to either undo those improvements that we do get or stops any that we’re trying to push.”

Noting that truck safety was suddenly “at the forefront of the national conversation,” Bill Graves, president of the American Trucking Associations, cautioned that “no rule can address what a driver does in his or her off-duty time. “

The industry “strongly believes that drivers must take advantage of their off-duty periods for rest, and that drivers should not drive if they are fatigued,” he said in a statement.

Wal-Mart truck driver Kevin Roper had had no sleep for more than 24 hours before he plowed into the back ofMorgan’s limo bus about 1 a.m. on Saturday, according to local authorities. Roper, 35, of Jonesboro, Georgia, apparently failed to slow for traffic ahead on the New Jersey Turnpike in Cranbury Township and swerved at the last minute to avoid a crash. Instead, his big rig smashed into the back of Morgan’s chauffeured Mercedes limo bus, authorities said.

McNair was killed and Morgan, 45, a former “Saturday Night Live” and “30 Rock” cast member, and two other companions were hospitalized in critical condition. Roper has been charged with death by auto and four counts of assault by auto.

Scientists say sleep deprivation affects behavior much like alcohol, eroding judgment and slowing reflexes. In several accidents investigated by the National Transportation Safety Board, commercial drivers suffering from lack of sleep have driven straight into vehicles clearly visible to them without applying brakes or applying them too late because they failed to grasp what they were seeing.

Accidents involving tired truckers also tend to have larger numbers of deaths and severe injuries because of the damaged inflicted by trucks weighing tens of thousands of pounds, according to investigators.

The provision added to the transportation spending bill by Sen. Susan Collins, R-Maine, and supported by the trucking industry, rolls back regulations governing driver hours that were put in place last summer by the motor carrier administration.

The rules essentially force them to take a longer weekend every other week. The regulations also added a requirement that any 34-hour rest period include two nights during which drivers have the opportunity to sleep between 1 a.m. and 5 a.m., the hours when people most crave sleep because of their bodies’ circadian rhythms cause them to naturally slow down while it is dark outside. Those same rhythms often make it difficult for people to sleep during the day, or to get restful sleep if they do doze off.

Under Collins’ provision, truckers could go back to taking 34 hours off between every work week with no requirement for two nighttime periods during their time off. The senator and trucking industry officials said it is safer for truckers to drive at night when there is less traffic and that current regulations increase truck traffic on roads during morning rush hours. Safety advocates and administration officials said there is no evidence that’s the case.