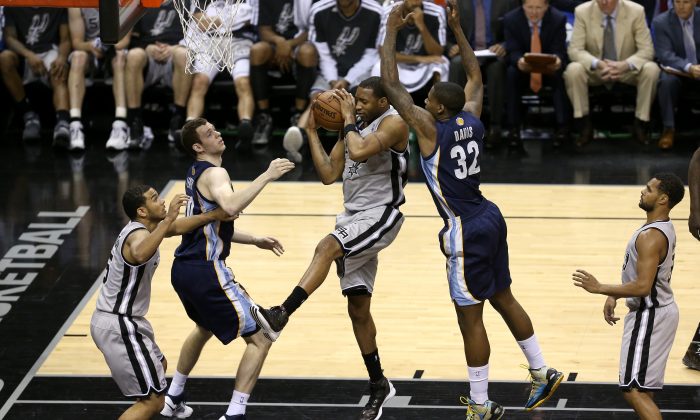 Tracy McGrady #1 of the San Antonio Spurs grabs a rebound against Ed Davis #32 of the Memphis Grizzlies during Game One of the Western Conference Finals of the 2013 NBA Playoffs at AT&T Center on May 19, 2013 in San Antonio, Texas. (Stephen Dunn/Getty Images)
NBA

Tracy McGrady, one of the superstars about a decade ago, had a negative aspect on his otherwise stellar resume before this year–never having won a playoff series.

“I’ve always stepped up in the playoffs,” he told reporters in April. The teams that we faced were obviously better than us.”

McGrady got a surprising call after returning earlier this year from a stint playing in China. He walked out of church and found Gregg Popovich, coach of the San Antonio Spurs, on the line.

Just like that, he was back in the NBA. And several playoff rounds later, he has a chance to win a title. It would be a crowning achievement to his high-level career.

What Led to This

McGrady’s career started out with the Toronto Raptors, where he had a relatively average showing for three years starting in 1997. After he was traded to the Orlando Magic, he quickly became known as one of the league’s top players, posting above 20 points per game through the 2007-2008 season, by which time he was playing for the Houston Rockets.

Several playoff runs with the Rockets and Center Yao Ming didn’t get past the first round, with Ming being hurt in some of them.

Injuries started to plague McGrady, and he departed from the NBA after playing 52 games for the Atlanta Hawks in 2011 and 2012 and only averaging 16 minutes a game.

His stint there included scoring 13 points in a 35-second period in one game.

McGrady said in an interview after his first practice with the Spurs in April that he had become a “couch potato” since returning from China. His agent had told him that the Spurs were interested in McGrady, but after a month and a half went by he said he stopped trying so hard to stay in shape, instead spending lots of time with his family.

The opportunity to fit into the Spurs, an established perennial championship contender, “is unbelievable,” said McGrady. “A championship environment, something I haven’t really been a apart of my whole career.”

So far, McGrady hasn’t scored a point while taking four shots in 17 minutes in four playoff games. There’s no sign of whether he’ll play in the finals.

As for retirement, McGrady told Yahoo! Sports that “it’s a possibility.”

“We’ll see after this season how I feel,” McGrady said. “If this team was the last team standing, who knows how I would feel about playing basketball again? To be on a championship team and to win a championship … if that was to happen, I don’t see any other reason for me to come back. I feel that I got a lot of game left, but I can’t come back and settle.”