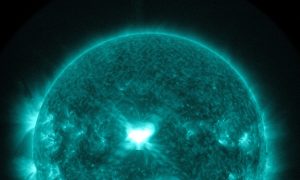 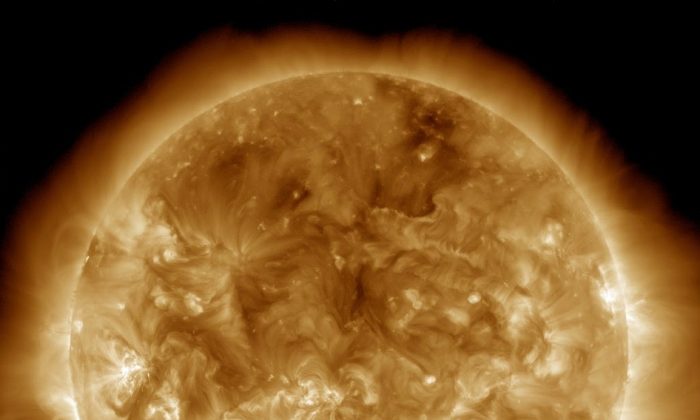 Evidence of an unusually huge solar storm that battered the Earth, showering it in radioactive particles more than 2,500 years ago, has been discovered by scientists beneath the Greenland ice sheet, The Guardian reported.

The team, who were studying ice almost a third of a mile beneath the surface, found traces of the huge radiation blast which hit the earth during a storm in 660 BC, embedded in Greenland ice cores.

Our article on an enormous solar storm is now online at PNAS:
Multiradionuclide evidence for an extreme solar proton event around 2,610 B.P. (∼660 BC)https://t.co/lhp1D6cy6P pic.twitter.com/9utEVkPljm

The type of solar emission discovered in the Greenland ice is a particularly powerful type of solar storm called a solar proton event (SPE), which hit some 2,679 years ago.

The event was at least 10 times more intense than any storm in the past 70 years—since modern records began. Its strength also matches the world’s most powerful solar storm, which struck the planet in AD 775.

“What our research shows is that the observational record over the past 70 years does not give us a complete picture of what the sun can do,” said Raimund Muscheler, a geologist at Lund University in Sweden.

The discovery is alarming, Muscheler explained, as if a storm of a similar magnitude were to hit the Earth today, modern technology could be greatly disrupted.

Although the Earth was hit by two solar storms in Quebec, Canada, in 1989 and Malmo, Sweden, in 2003, these were dwarfed by the 660 BC solar storm.

Air Traffic over Sweden is resuming after earlier radar failure because of a solar storm pic.twitter.com/D5jhjpuTi5

“If that solar storm had occurred today, it could have had severe effects on our high-tech society.

From time to time, the sun emits massive blasts of radiation and high-energy particles that can make its way towards Earth. SPEs can degrade the Earth’s ozone layer temporarily, which can allow hazardous levels of ultraviolet radiation to reach the ground.

If such an incident were to occur in the modern era, these charged particles can disrupt satellite communications, radio signals, disable power grids, as well as damaging electrical systems and devices, such as transportation and banking.

If a particularly strong SPE were to hit the planet today, it could pose “a threat to modern society in terms of communication and navigation systems, space technologies, and commercial aircraft operations,” their research found.

The high radiation levels could also be hazardous for astronauts and passengers on aircraft that reach high altitudes.

Muscheler and his research team examined two 100,000-year-old ice cores from Greenland before they made the astonishing discovery.

They found traces of chlorine and beryllium isotopes in the ice from the deadly storm over 2,500 years ago.

“A solar proton event of such magnitude occurring in modern times could result in severe disruption of satellite-based technologies, high frequency radio communication and space-based navigation systems,” the scientists wrote in Proceedings of the National Academy of Sciences (PNAS).

The researchers believe at least 10 billion protons per square centimeter were unleashed into the atmosphere from the event.

And while enormous solar storms are a rare occurrence, they seem to occur periodically, the researchers explained.

“Our research suggests that the risks are currently underestimated. We need to be better prepared,” Muscheler added.