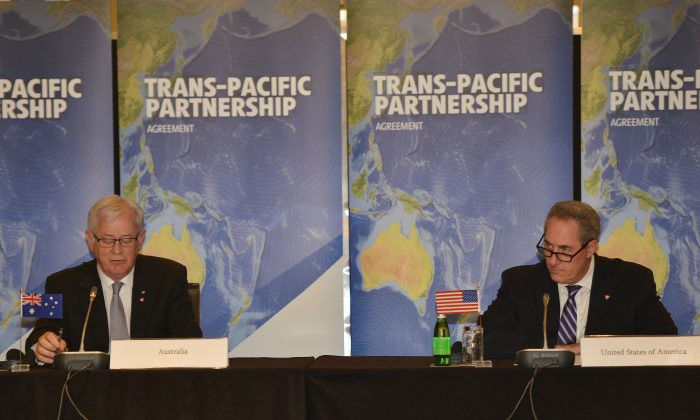 President Barack Obama has insisted up and down that he’s willing to work with the Republicans who are taking over the Senate.

He proved it during his November visit to Beijing, where he urged world leaders to come to agreement on the Trans-Pacific Partnership (TPP)—a longtime priority of soon-to-be Senate Majority Leader Mitch McConnell.

What’s the TPP, you ask?

It’s a giant trade agreement between the United States and 11 other Pacific Rim nations—including Australia, Japan, and Malaysia, among others—now being negotiated in secret.

Well, mostly in secret. Around 600 corporations and a few labor unions with stakes in the talks have seen a draft. Except for a few chapters released by WikiLeaks last year, Congress and the public have not.

But here’s what we do know: This so-called partnership is an insult to U.S. workers. And it’s especially bad news for women.

According to Doctors Without Borders, for example, the agreement’s intellectual property clauses could cut off access to generic drugs for people living with HIV/AIDS—who are increasingly women and children.

And the Communications Workers of America union said the pact will make it easier for corporations to outsource majority-female jobs—not only in low-wage workplaces such as call centers, but also higher-wage sectors like human resources.

So it’s no surprise that women in Congress have been leading the opposition to the TPP for some time.

In the House, Democrats Rosa DeLauro and Louise Slaughter pointed out in a forceful Los Angeles Times op-ed that the agreement would force Americans to compete against workers from extremely low-wage countries. It would also, they argued, roll back environmental standards and U.S. laws that protect food and drug safety.

In the Senate, Democrat Elizabeth Warren has expressed worries that the secretive agreement could weaken financial regulations. She opposed the appointment of Michael Froman as the U.S. trade representative—a job that has made him the chief arbiter of the treaty-making process—because he flatly stated his opposition to more transparency in the negotiations.

And there’s another little-known provision.

Under the proposed rules, businesses incorporated in TPP countries—any of them—would be guaranteed equal treatment with U.S. firms when bidding on government contracts.

That means our tax dollars could go to underwriting companies in countries like Brunei, which imprisons unmarried women for getting pregnant and allows the stoning of gays and lesbians.

I’m all for cooperation in government, and I do hope President Obama and Mitch McConnell can agree on some things—like a higher minimum wage for instance.

But the Trans-Pacific Partnership? Sink it.

Martha Burk is the director of the Corporate Accountability Project for the National Council of Women’s Organizations (NCWO) and the author of the book “Your Voice, Your Vote: The Savvy Woman’s Guide to Power, Politics, and the Change We Need.” Follow Martha on Twitter @MarthaBurk. Distributed via OtherWords.