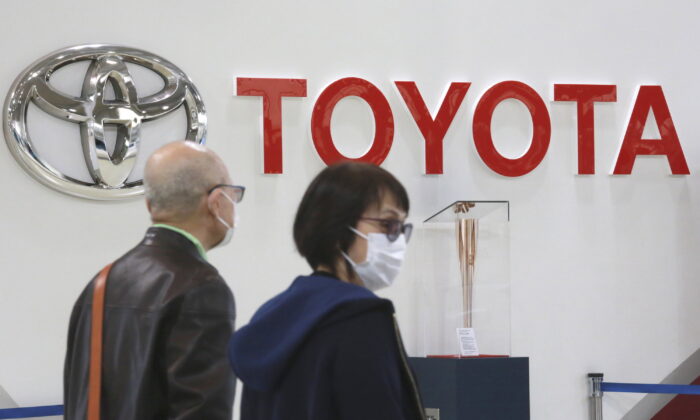 People walk past the logo of Toyota at a showroom in Tokyo, on Oct. 18, 2021. (Koji Sasahara/AP Photo)
Companies

TOKYO—Toyota is suspending production at all 28 lines of its 14 plants in Japan starting Tuesday, because of a “system malfunction” at a domestic supplier, the automaker said Monday.

Public broadcaster NHK TV and other Japanese media said a major Toyota supplier had been hit by a suspected cyberattack. No details were given. It was unclear when production would resume.

The maker of the Prius hybrid and Camry sedan declined to comment on the reports. A spokeswoman said the company did not have all the details.

A system malfunction at a plant could possibly refer to power being down or other overall problems, but a cyberattack is one possibility.

Toyota Motor Corp. apologized for inconveniencing its customers and promised to fix the supply glitch “as soon as possible.”

Toyota and other automakers already are grappling with shortages of computer chips and other parts due to disruptions from the coronavirus pandemic.

Some customers have been waiting months for their orders to be delivered.