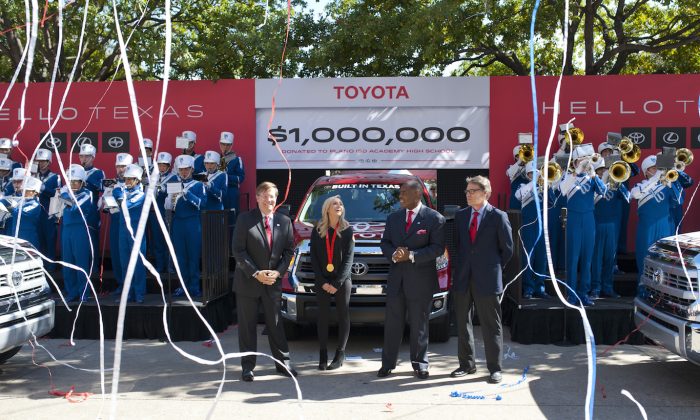 Toyota Welcomes Community to a Texas-sized Party in Plano, Texas

Always looking to the future, innovative Japanese automaker Toyota chose to consolidate its extensive North American operations by moving the headquarters to a 100-acre site in Legacy Park, located in the rapidly-growing city of Plano in North Texas. Construction of the center will begin late in 2014 or early in 2015, with official opening planned for 2017. Some 4,000 Toyota employees have been invited to move to the new headquarters.

“We are thrilled to be here in Plano and look forward to a fantastic day of celebration with our new neighbors,” said Toyota Motors North American CEO Jim Lentz, who has already moved to the area. “This is just the start of what I know will be a long-lasting friendship. I love the Texas spirit with a capitol T.”

Lentz said that Toyota had already invested $2.2 billion in Texas via their truck plant in San Antonio, and has produced over a million trucks. The plant employs 2,900 workers and 15,000 other workers in spin-off businesses. There are nearly 100 Toyota dealerships in Texas.

The high point of the event came just at noon, with a presentation by Lentz, Nastia Liukin, Plano Mayor Harry LaRosiliere, and Texas Governor Rick Perry announcing Toyota’s donation of $1M to Plano’s Academy High School. Members of the high school’s marching band, drum line, drill team, and cheerleaders were there to applaud the generous gift to their community.

“Toyota is committed to being a model neighbor and corporate citizen,” said Lentz. “We are pleased to join other local businesses in supporting the STEAM curriculum and helping open the eyes of students to career opportunities in these fields. We look forward to furthering the school’s mission to inspire tomorrow’s leaders through problem solving, team building, mentoring, and student immersion into the business world.”

Lentz also announced a gift of six Toyota Tundra trucks, made at the San Antonio plant that also manufactures their Tacoma mid-sized pickup trucks, to the Mayor for the City of Plano to use.

“We are thankful for Toyota’s generosity and truly appreciate the unexpected donation,” said Mayor LaRosiliere. “We will put these Tundras to great use immediately and are proud that they are built at Toyota’s manufacturing facility in San Antonio by the more than 6,000 hardworking Texas men and women employed there.”

Earlier that day, Toyota executives spoke to 400 VIP guests at the Dallas-Plano Marriott, where they thanked city and state officials and others who helped Toyota establish its new headquarters in Plano.

Lentz estimates that hundreds of job applicants from North Texas will also have an opportunity to work for Toyota once the new headquarters open.

Texas Governor Rick Perry was also on hand for the event and continued Lentz’s praise of the state. From September 2013 until this September, Texas has added 413,000 jobs to the Texas work force.

Both men indicated their support for veterans and minorities. Lentz stated that 7 of their 21 vendors for the Texas truck plant were headed by women and over $2.4 billion had been spent by Toyota for minority business products nationwide. Toyota has also helped 411,000 veterans through their Hire Our Heroes Program.

Gov. Perry said there was a 118 percent increase in Texas college enrollment for Hispanic students this year. He thanked Toyota for their involvement in the community and their role in creating education and employment opportunities everywhere they go.