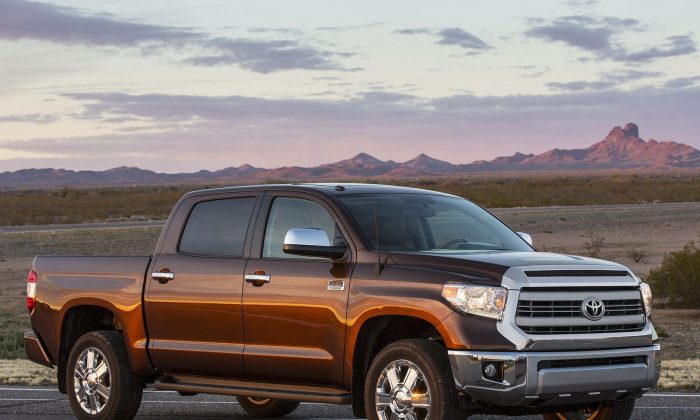 Toyota has endured sorted success with its full-size pickups. The T100 was nice, but underwhelming. Same was true of the first-generation, not-quite-big-enough Tundra. By gen-3, Toyota had constructed a new plant in Princeton, Ind., to assemble the finally-very-full-size truck. It later moved to a gleaming new plant in San Antonio, Texas, where the 2014 fourth-generation pickup, the first major update since 2007, is exclusively built.

Maybe not as dramatically styled as the FT-1 supercar, Tundra’s new duds are nonetheless dramatic. It’s big, and designed to look bigger. The updated design features an updated hood and grille that’s bolder and more industrial. Fenders and wheel wells were squared for a sturdy appearance. You can buy a two-door Regular Cab, four-door Double Cab, or super-sized four-door CrewMax like our Limited test truck that flaunts limo-length rear doors. Limited’s ruggedly-handsome appearance includes a minimum of chrome.

You could ride from the tundra to the Sahara in the truck’s roomy and high-tech interior. Gone is the last-generation Tundra’s zoned high-plastic interior theme, replaced with an upscale Lexus look that includes metalgrain on the center stack, stitched coverings, and wood-style dash planks. Heated leather seats enhance comfort. Toyota calls it “active premium.” Passengers in an Audi A8 have no more rear seat space than our limo-large pickup. Consoles are deep and wide.

Getting there is easy with the potent powertrain. The Limited’s 5.7-liter V8 dishes out 381 horsepower and 401 lb.-ft. of torque—plenty to haul almost anything you imagine or to quickly move five peeps and their stuff down the Interstate with gusto. A six-speed automatic transmission (with tow/haul model and oil cooler) and part-time AWD system with 4Lo, put power to pavement. Step lightly and you’ll see a less-than-frugal 13/17 mpg city/hwy. Step not so lightly and you’ll pray for an oil well.

Tundra’s problem is not that it’s a bad truck, or that it messes with Texas, but that owners of the Chevy Silverado, GMC Sierra, Ram 1500, and Ford F-150 are inextricably loyal (Toyota also provides no heavy duty Tundra). There is no tougher market to break into, but that is not a reflection on Tundra’s total package.

Should any of those buyers choose to defect, they’ll find a quality truck that was engineered in Ann Arbor, MI; designed in Newport Beach, Calif.; powered by engines assembled in Huntsville, AL; transmissions from North Carolina; and assembled in San Antonio, Texas. Despite the Japanese nameplate, it is born and bred right here in Uncle Sam’s great expanse of America. Prices start at $26,200, but our well-equipped Tundra Limited came to $44,459.