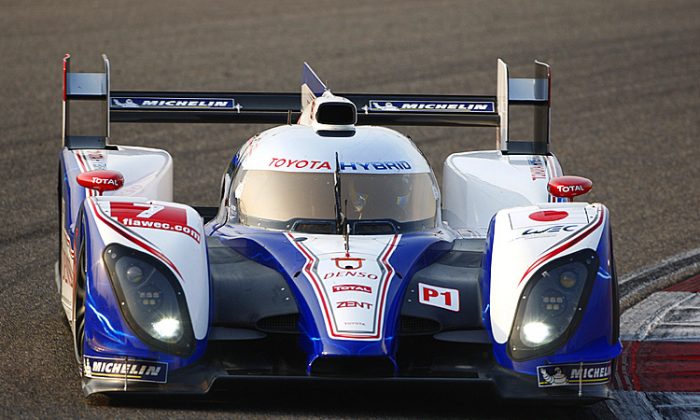 Toyota had a significant edge in speed in the second Free Practice session for the WEC Six Hours of Shanghai. (Toyota Motorsports)
Motorsports

Toyota has found China to be a very hospitable destination, as the factory’s TS-030 Hybrid was the quickest car around Shanghai’s bumpy, twisting, 16-turn, 5.45-km track in second practice. Audi took the honors in first practice, but the #7 Toyota bounced back to take nearly two seconds of its time in Free practice 2.

Drivers Alex Wurz and Nicolas Lapierre finished with a best lap of 1:50.573 art 177.5 kph, a full second faster than the quickest Audi, the #2 R18 etron quattro of Tom Kristensen and Allan McNish, and  1.5 seconds quicker than the #1 Audi of Marcel Fässler, Benoît Tréluyer, and André Lotterer.

If Toyota can maintain that edge through the race, the TS-030 would have enough time for the extra fuel stop it usually has to make compared to the Audis. A lot will depend on tire life; if both teams can double-stint tires, Toyota losses a little edge and will have to make perfect pit stops.

Toyota might gain a further edge as many of the tracks straightaways are followed by tight turns, where Toyota’s rear-wheel hybrid system can help regain speed; Audi’s all-wheel-drive system is not allowed to activate in very slow corners.

Audi needs to stay out of trouble in traffic. Its R18 etrons are slower but more efficient, but that edge is lost if the cars have to spend time getting repaired after collisions, as happened at the last round at Fuji.

Audi, which assumed it would dominate WEC this year after Peugeot’s abrupt departure, has found itself hounded by the one-cat Toyota effort— a program which intended to use 2012 as an exploratory season, concentrating on winning in 2013 with a full two-car assault.

Instead, the Japanese manufacturer has won two races already, and looks likely to win a third.

The German factory team will not want to give up another win—but Toyota wants to grab another win just as much. With 28 cars on track and six hours of racing, anything could happen. The only guarantee is that the race will be exciting.

Live timing and video streaming (for qualifying and the race) can be found at the WEC website.