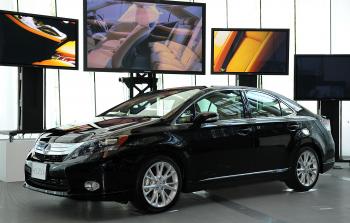 NEW YORK—Toyota Motors Corp. has issued a safety recall for 3.8 million cars, including three Lexus models, due to a recently discovered issue with the floor mat design.

Toyota issued a statement on Tuesday saying that the mats had to be removed to alleviate a forced-down accelerator pedal problem.

Toyota, which is world's largest automaker and is headquartered in Japan, said that the floor mats could cause problems with the accelarators in seven models of cars, causing the pedal to become stuck in its position.

"A stuck open accelerator pedal may result in very high vehicle speeds and make it difficult to stop the vehicle, which could cause a crash, serious injury or death," read the statement issued by Toyota on Tuesday.

The urgent and immediate safety recall by Toyota is believed to have been spurred by an August crash near San Diego, Calif., where a Lexus ES 250 careened out-of-control and crashed, killing four members of a family. A 911 call had been placed by one of the passengers in the car just prior to the crash. Toyota believes that the crash may have been caused by the stuck accelerator.

The recall is the largest for Toyota in the United States.