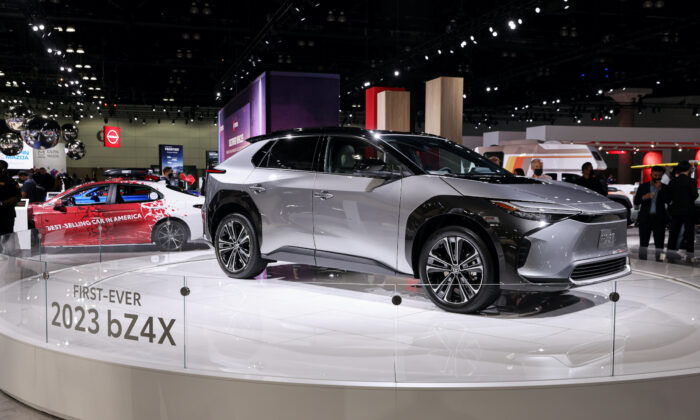 Toyota has issued a global recall of its first mass-produced electric vehicle (EV) over loose bolts connecting the bZ4X’s wheels, which might result in the wheels falling off while driving.

“The hub bolt may loosen due to repeated sharp turns and sudden braking. Therefore if you continue to drive in that state, abnormal noise will be generated, and in the worst case, the tires may fall off,” the automaker said on its website.

The Japan-based company has also warned bZ4X owners to refrain from using the EVs until the issue is resolved.

“We sincerely apologize for any inconvenience caused to your patrons. We will repair it promptly, but we are investigating the details,” it stated.

Subaru also announced the recall of 2,600 units of its EV, the Solterra, over the same defect.

The Solterra marks Subaru’s first EV that it jointly developed with Toyota, which owns 20 percent of the company.

The move comes less than two months after Toyota released the bZ4X, the first model in its global bZ series, which stands for “Beyond Zero.” It has a power efficiency of 128 Wh/km and a predicted battery capacity retention ratio of 90 percent after 10 years.

The recall of the bZ4X was a setback for the carmaker, which plans to invest $35 billion to sell 3.5 million EVs globally by 2030 and release 30 battery-powered models within the same period.

Meanwhile, U.S.-based Ford also recalled 49,000 Mustang Mach-E EVs last week due to the potential overheating of high-voltage battery main contractors, which could cause a loss of power while driving.