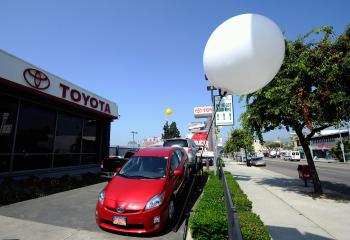 Jack Phillips
Breaking News Reporter
Jack Phillips is a breaking news reporter at The Epoch Times based in New York.
View profile
Follow
biggersmaller
Print
Toyota Motor Corp. posted profits of $2.2 billion during the first quarter of 2010, according to a report from the company on Wednesday.

The Japanese automaker said that their sales went up 27 percent from April to June, from $44.6 billion to $56.7 billion.

Even though the company had to recall some 10 million cars this year, cost-cutting and marketing helped the company boost its revenues. More consumers in the Asian market purchased Toyota vehicles, the company said.

However, a weak yen bolstered sales in the United States, where most Toyota cars are sold, as it drove down the cost of the vehicles in overseas markets.

"Due to an increase in vehicle sales and a large decrease in the costs related to loan losses and residual losses in Financial Services, operating income improved substantially on last year," said Toyota Senior Managing Director Takahiko Ijichi in a statement.

After the higher-than-expected earnings, Toyota, the world's largest car manufacturer, will raise its forecast for the year until March 31, 2011.

The company expects they will sell 7.38 million units and earn $4 billion globally instead of 7.29 million units.