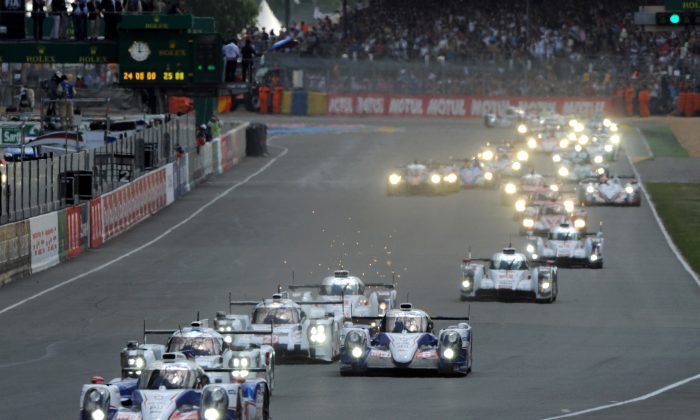 Drivers take the start at the 82nd 24 Hours of Le Mans endurance race in Le Mans, western France, on June 14, 2014. 54 cars with162 drivers are participating in the race on June 14 and 15. ( Jean-Francois Monier/AFP/Getty Images)
Motorsports

Sudden rain and aggressive driving combined to cause a collision which has sidelined the #3 Audi R18, heavily damaged the #8 Toyota TS 040, and also ruined the GTE-Am -leading #81 AF Corse Ferrari early int he second hour of the Le Mans 24-hour race.

Replays are not clear, but the best explanation seems to be that Nicholas Lapierre in the fifth place #8 Toyota tired to pass the GT Ferrari on the right, lost control and hit both the Ferrari and the barriers, while the Ferrari caromed into the Audi, sending it backwards into the left-side Armco.

The #7 Toyota TS 040 with Alex Wurz at the helm led the race from the pole and continued to lead un caution, with André Lotterer in the #2 Audi R18 e-tron quattro in second and Timo Bernhard in the #20 Porsche 919 Hybrid third. Tom Kristensen in the #1 Audi followed in fourth.

The #14 Porsche broke down early in the race, losing five laps. It was repaired and rejoined, but lies 23rd.

At the two-hour mark Corvette Racing led in GTE-Pro with Oliver Gavin in the #74 CR.7 leading a pair of Porsches, Fred Makowiecki the #92 Manthey Porsche 911 RSR and Patrick Pilet in the #91 Manthey car.

LMP2 as always has been hotly contested. Franck Mailleux leads the class in the #34 Race Performance Oreca-Judd, ahead of Richard Bradley in the #47 Oreca-Nissan and Paul-Loup Chatin in the #36 Signatech Alpine-Nissan.

Samm Bird had been leading GTE-Am in the #81 AF Corse Ferrari before the accident. With his retirement, Patrick Long in the #77 Dempsey Racing/Proton Porsche 911 RSR took over at the top fo the class, with Johnny Mowlem in the #53 Ram Racing Ferrari and Nic Jönsson in the #57 Krohn Racing Ferrari third.

The Garage 56 entry, the Nissan ZEOD, surrendedered to transmission failure only 24 minutes of racing.

Follow the race on Fox Sports 1, and Radio Le Mans.com, with Live Timing and Scoring at http://live.fiawec.com.