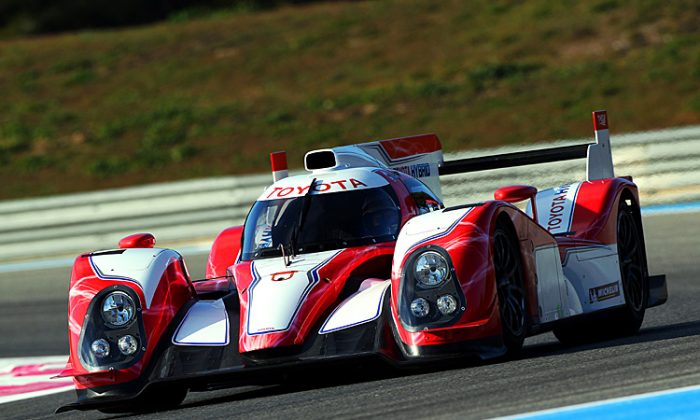 Toyota has announced the driver line-ups for both the TS030 Hybrids it will run at Le Mans 2012. (Toyota)
Motorsports

Toyota Racing has chosen its drivers for the team’s two-car assault on the Le Mans 24 Hours and its solo effort for the rest of the 2012 World Endurance Championship.

Drivers for the second car, definite for Le Mans and probable for the Fuji round (that being Toyota’s home track), will be ex-Peugeot pilot Anthony Davidson, former Toro Rosso F1 driver Sébastien Buemi, and Super GT driver Hiroaki Ishiura.

Davidson has ample endurance experience, with wins at the Sebring 12 Hours and the Six Hours of Spa. Buemi is new to sports cars, but F1 champion-Red Bull racing thinks enough of his skills to have hired him as a backup driver. Ishiura has raced in the Nürburgring 24, so the traffic around Le Mans will not faze him.

“This is a big opportunity for me to achieve one of my lifetime ambitions: to race in the Le Mans 24 Hours,” said Hiroaki Ishiura in a press statement. “Over the last few years I have done a lot of endurance racing so I am familiar with this style of motorsport but I expect the scale and speed of Le Mans to be something else.

“The TS030 Hybrid is already quite familiar to me because I tested the car at the roll-out; in fact I was the first person to drive it! It’s a great-looking car and seems to have strong potential so I am looking forward to contributing to its development. More than anything, I am looking forward to getting behind the wheel at Le Mans. I can’t wait!”

Anthony Davidson was equally eager to return to Circuit de la Sarthe: “I’m really happy to be a part of the Toyota Racing team, and delighted to be returning to Le Mans this year. Competing at the Le Mans 24 Hours is always hugely exciting, but to be joining a team like Toyota Racing and competing with a hybrid powertrain makes this particularly special.

“I’ve heard a lot about the TS030 Hybrid and the technology behind it, and I’m looking forward to experiencing hybrid power for the first time in my career. I know this is a learning year for the team but I believe Toyota Racing has huge potential, and I hope we can prove that at Le Mans.”

Sébastien Buemi seemed undaunted to be entering the sports car racing world at its biggest race. “I am really proud to be a Toyota Racing driver at Le Mans; it’s a huge event and one of the biggest in motorsport. It’s exciting to be driving a hybrid car; I think this is the future and it’s nice to see Toyota pushing a lot in that direction.

“I’ve driven hybrid cars in the past—the first- and second-generation Prius—but the TS030 Hybrid is something else. I’m looking forward to racing it; LMP1 cars are fast and it’s a professional environment so it is going to be a very positive experience for me.”

The Toyota TS030 is expected to debut at the Spa-Francorchamps WEC round on May 5. The 80th Anniversary Le Mans 24 Hours will start on June 16 and finish on June 17.