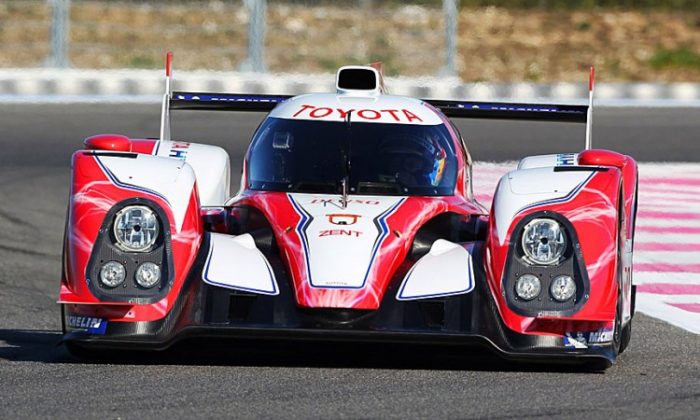 Toyota will compete for the 2012 WEC championship its TS 030 Hybrid. (Toyota)
Motorsports

Toyota, which had originally announced that it would be competing in only the Le Mans 24 and a few select races in 2012, has instead decided to contest the full season, save Sebring.

Toyota will debut its LMP1 TS 030 Hybrid at Spa in May, and compete in all subsequent rounds of the WEC. The company will enter two cars for Le Mans, and probably for its home round in Fuji in the fall.

The withdrawal of Peugeot from the WEC caused governing bodies FIA and ACO to change their admissions rules, and apparently induced Toyota to expand its plans.

Yoshiaki Kinoshita, Team President, said in a press release, “The circumstances for the championship changed suddenly in the last weeks and Toyota Racing considers it important to work together with the FIA and ACO to establish a successful future for endurance racing.

“We have done everything we can to show our support and we look forward to an exciting season, including the opportunity to race two cars at Le Mans.”

With both Peugiot and Audi entering several turbo-diesel hybrids, and the current rules favoring those powerplants, Toyota was planning to use 2012 as a test season, preparatory for a full assault in 2013—there would not have been much chance for Toyota to even see the podium with Peugeot and Audi in the field.

With the withdrawal of Peugeot, Toyota can hope not only for podium finishes, but also that the ACO and FIA might be more strict in applying equivalency rules between different fuel types; the two governing bodies cannot afford to drive off Toyota and leave Audi as the only factory fielding a prototype.

Toyota has been approved to run two cars at Le Mans, revealed at the ACO press conference at which it was also confirmed that Toyota was accepted as a WEC entry.

Toyota has announced the driver line-up for its lead car at Le Mans: Alex Wurz, Nicolas Lapierre and Kazuki Nakajima. The driving crew for the second car his still being determined.