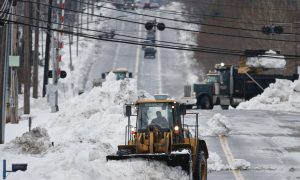 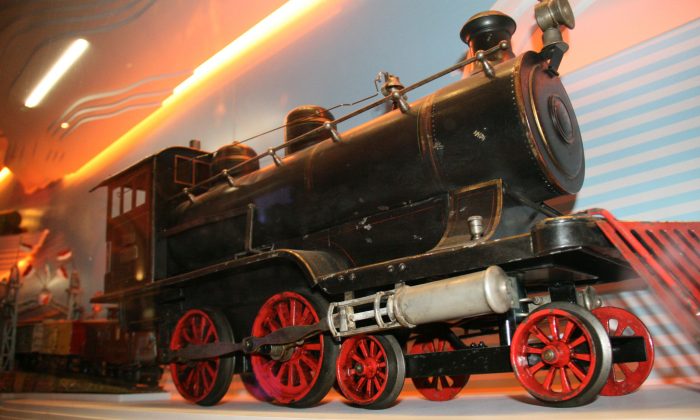 NEW YORK—Fans of miniature caboose who are nostalgic for their childhoods could consider the Holiday Express exhibit. On view at the New-York Historical Society until Feb. 22, the exhibit features antique toys and trains from a collection amassed for over fifty years by a Pennsylvania couple, Jerry and Nina Greene.

For the exhibit’s celebratory opening night on Tuesday, many Upper West Side residents and others came to marvel at the toys, which feature the best of the Greenes’ American and European trains.

Many of Jerry Greene’s family also came to support him, driving in all the way from Pennsylvania.

Brandt Anderson, the Greenes’ 17-year-old grandson, recalled visiting his grandfather’s home numerous times, growing up and playing with the collection.

The museum’s directive had been to “make it sparkle,” said Lee Skolnick, 61, an architect part of the team who designed the exhibit.

Skolnick, who resides in Greenwich Village, said it was challenging to make static objects exciting—but they found ways: From audio sound effects of a train entering the station, to a small hole in the wall where visitors, mostly kid-size, could crawl through to see the trains from inside, the display was exciting for all.

Insurance agent Priscilla Hoffman, 73, came with her husband Ronald, who is 86 and retired, to the kickoff.

They live three streets away, and came to preview it for their three year old grandson who will be arriving from Washington D.C. to visit them Wednesday.

Others lived further out, but made the trip just to enjoy old times with trolleys and little figurines marching off to work.

“Trains are a symbol of my childhood. They’re gorgeous.” said Hollander, who has published a biography and picture book about an inventor of toy trains.

Even former New York City mayor Michael Bloomberg made an appearance. Bloomberg, whose philanthropy organization sponsored the exhibition, got a personal tour with the curator and high-fived several children.

Greene’s family and Skolnick alike have found the reactions of young and old to be rewarding.

“It’s been an unbelievable reaction,” said Skolnick. “Everyone’s a kid again. This is our gift to New York.”

As to why the trains have ended up at the museum, Greene’s daughter, Melissa Greene-Anderson, 51, said that her father had simply completed his collection.

“For a collector, the hunt is what it’s about,” she said.

Correction: An earlier version of this article stated that journalism professor Ron Hollander published a children’s book. It is actually a picture book for adults. The Epoch Times regrets the error.