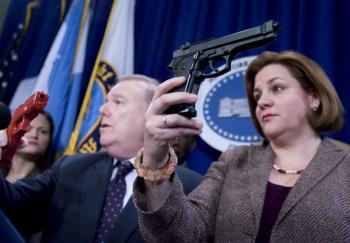 Council Speaker Christine Quinn (C) holds up a toy gun that looks too much like a real gun. (William Alatriste/New York City Council)
US

Council Speaker Christine Quinn, together with Council Member Al Vann, announced on Tuesday new legislation that would increase penalties by up to 500 percent for retailing imitation toy guns.

The legislation would also allow the Department of Consumer Affairs (DCA) to temporarily shut down stores that repeatedly break the law.

“Despite the fact that New York City’s toy and imitation gun law has been in existence for several years, many merchants continue to sell items that resemble real guns,” said Quinn in a press release.

“Our communities are at risk when they cannot tell a fake toy gun from a real one and the dangers these items present are all too real. Children have been hurt and even killed as a result of these guns being out in our communities.”

The legislation would also permit DCA to seal, for up to five days, the premises of stores found guilty of three or more violations within a two-year period.

Since 2002, DCA has removed more than 7,200 imitation guns from the shelves of nearly 240 stores throughout the city and levied $2.4 million in fines.

In order to warn New Yorkers of the dangers of realistic-looking toy guns and real guns that are painted to appear like toys, the city will launch a new subway advertising campaign to cover 2,100 subway cars, all 468 subway stations, and more than 5,400 buses.

As more New Yorkers are becoming aware of the issue, they are encouraged to call 311 to raise any question or concern. Calls to 311 regarding real guns that look like toys will be forwarded to the Police Department’s Gun Stop hotline. Callers, who will remain anonymous, can receive a $1,000 reward for information that leads to a conviction. The city has received a grant from the New York State Division of Criminal Justice Services to support the ad campaign.

“Toy guns that look real and real guns that look like toys threaten the safety of our dedicated police officers and our children, especially during this holiday season,” said Criminal Justice Coordinator John Feinblatt. “This public awareness campaign will help to educate the public about the dangers posed by these guns.”