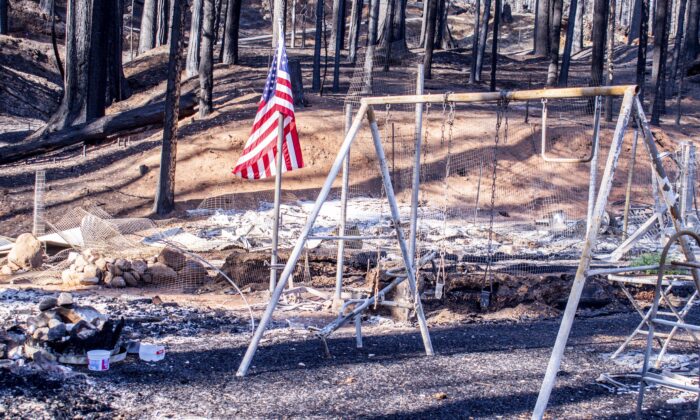 Ashlee Smith started her nonprofit organization, Ashlee’s Toy Closet, when she was 8 years old, after she lost her house to the Angora Fire in 2007. Now, at age 22, she’s still giving out toys, this time to children affected by the Caldor Fire in the town of Grizzly Flats, California.

Smith participated in a relief effort for fire victims on Sept. 26.

“That big pink truck out there was full of toys. So, we estimate between 10 to 15 thousand toys, and it was all for them,” Smith told NTD News regarding the event.

Her organization has been covering every West Coast fire.

“We do donate toys to kids to single house fires, Christmas, birthdays. We kind of do it all, so I kind of have a stockpile of toys, I like to call it,” Smith said.

In the future, she hopes to have an East Coast chapter of Ashlee’s Toy Closet to help children affected by hurricanes.

One resident who was helping the organization distribute toys said she had lost her home to the fire. But she was still present to help her community.

Tyler has lived in Grizzly Flats since 1955 when she married Walt Tyler. Her husband, who passed away 10 years ago, had an elementary school named after him—Walt Tyler Elementary School—but it was destroyed by the fire.

“Today, we were able to do everything from children and baby needs, clothing, shoes, hygiene, household necessities,” Elizabeth Jernberg, owner of E&J’s Kitchen, told NTD News. “The GEM and Be Strong department has family necessity boxes, which is also [an accumulation] of Liquid IV, sanitizers, socks, towels, and little blankets.”

They’re also offering camping gear and groceries to those in need, in an effort to help people get through the first phase of recovery until FEMA steps in.

“And then we’ll work on our phase two, which will be stuff to help people rebuild their homes and hopefully do tool drives,” Jernberg said. “We don’t promise anything like that. We just try to step into that category and work toward it. And usually, it happens, and sometimes it’s great and sometimes it’s not.”

Jernberg said they plan to go to the Fawn Fire in Shasta County next to help the evacuees.

With reporting by Jacquelin Mullinax.