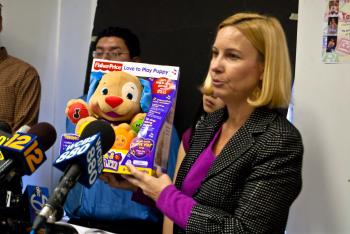 NYPIRG consumer attorney Tracy Shelton holds the 'Love to Play Puppy' from Fischer Price, which was found to contain high levels of bromine and low levels of mercury. The toy is marketed for babies. (Joshua Philipp/The Epoch Times)
US

By Joshua Philipp
biggersmaller
Print
NEW YORK—Toys lined up on a table—from Buzz Lightyear figures to plush puppy dolls and princess necklaces—all of which could kill or harm a child, according to the 2009 Trouble in Toyland report from the New York Public Interest Research Group (NYPIRG).

Findings of the annual report were released during a press conference on Wednesday. Several of the problematic toys were on display at the press conference, all of which were found on New York store shelves within the last two weeks.

Past reports have led to 130 recalls and other actions to get dangerous toys off store shelves, according to NYPIRG consumer attorney Tracy Shelton.

Shelton said the product that concerned her most this year was a fluffy stuffed animal marketed to babies. The "Love to Play Puppy" from Fischer Price was found to contain mercury and bromine.

"Just the fact that he is so cute and he's marketed to babies, and he contains these substances, bothers me," she said.

Although the findings were not as bad as last year, a third of the 699 products tested this year were found to contain one or more harmful chemicals.

Sheryl Gaynor of NYPIRG said that in addition to lead, "Toys were also identified this year with phthalates, cadmium, arsenic, chlorine, mercury, and bromine. There is simply no place for any of these toxic substances in children's toys."

Toys that are excessively loud and could cause hearing impairment and toys that pose choking hazards were also addressed this year.

The report pulls some findings from research by HealthyStuff.org.