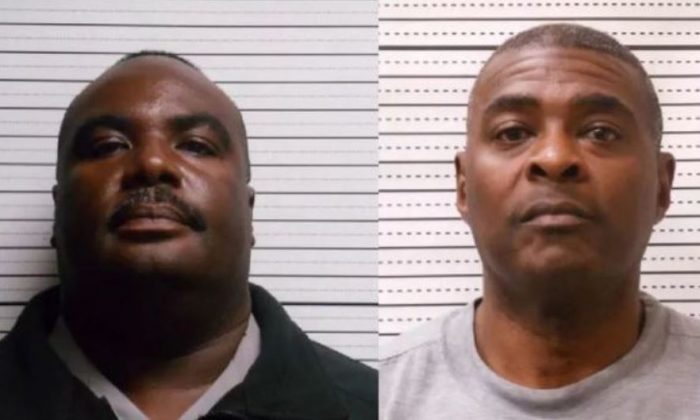 A North Carolina town’s entire police force is on leave after the chief of police and a lieutenant were arrested.

The arrests on Thursday were made after the pair allegedly worked at a second job as truck drivers while still on the clock with the police department.

A joint investigation was opened into Southport Police Chief Gary Smith, 46, and the second-ranking officer, Michael Christian Simmons, 48, after law enforcement officers tipped off investigators about the pair, reported CBS.

State investigators and FBI agents found that Smith and Simmons drove overnight shifts for a local trucking company during the same hours they claimed on their daily activity reports for the department.

“It is indeed that I get before you today with a heart laden with grief for all these events that happened today,” said Mayor Jerry Dove. “It was a shock to me to hear all these, being a former chief and knowing the officers that worked in that department and hired at least half of them.”

Following the arrests, all police operations in Southport were suspended and the rest of the force was placed on paid administrative leave.

District Attorney Jon David told reporters that it’s common for police officers to have second jobs, but the alleged crime was the so-called double-dipping.

The truck driving routinely took the officers outside the town and sometimes out of the country.

“It’s not unusual that a police officer would have a second job. However, there was a dereliction of duties … that really caused concern,” David said, reported the Star News Online.

“While these officers were reportedly on the clock, they were not even in the city of Southport. By the time these allegations were brought to us, it had been going on for a significant amount of time.”

David said the Brunswick County Sheriff’s Office will be providing a law enforcement presence. He also stressed that the department itself was not involved and that some Southport officers first brought the situation to the attention of investigators.

“A lot of these officers have done absolutely nothing wrong. Some of them are the ones that first came forward,” David said. “This stain should not be extended to the officers who take seriously their duty to serve and protect.”

“It’s going to be more in the nature of probation, with a fine, community service hours, things of that sort,” he said. “I have my own personal thoughts on what’s enough, but I think that’s what the sentencing guidelines mandate.”