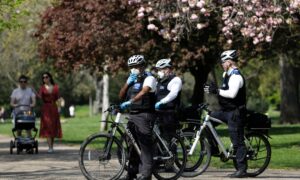 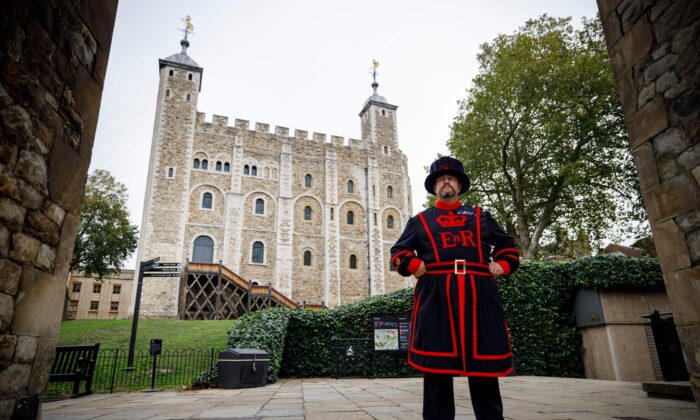 Yeoman Warder Ravenmaster Chris Skaife poses for a portrait at the Tower of London in central London on Oct. 12, 2020. - (Tolga Akmen/AFP via Getty Images)
UK

One of the eight famed ravens at the Tower of London is thought to have died, several weeks after going missing.

A 300-year-old royal decree states that at least six ravens must be kept at the tower, in keeping with an omen that if the ravens leave, the kingdom will meet with disaster.

There could be a less prophetic modern-day explanation for ravens spending less time at the tower, however. Under lockdown, without throngs of tourists, the intelligent ravens have become bored, and are straying further from the 900-year-old bastion to find amusement—and full bins—according to the Ravenmaster.

The ravens at the tower can live for 25 years and are a popular fixture for tourists, some of whom are familiar with the birds by name.

“Our much-loved raven Merlina has not been seen at the Tower for several weeks, and her continued absence indicates to us that she may have sadly passed away,” said the Tower of London in a statement on Twitter.

“Though it isn’t unusual for our ravens to roam outside the walls, free-spirited Merlina has previously always returned to the Tower and to the Ravenmaster and his team, with whom she shared a wonderfully close bond.”

Ravens in many cultures are a bad omen. English legend appears to reverse this, however.

According to the Tower of London website, the legend tells that an astronomer complained to King Charles II that the ravens were interfering with his observations.

“The King therefore ordered their destruction only to be told that if the ravens left the Tower, the White Tower would fall and a great disaster befall the Kingdom,” says the website. “Sensibly the King changed his mind and decreed that at least six ravens should be kept at the Tower at all times to prevent disaster.”

The person charged with looking after the ravens, known as the Ravenmaster, told the Sun last year that the birds got bored and lonely during lockdown with no full bins to rummage around in, and with no people to feed them.

To keep the birds amused, he gave them footballs, squeaky dog toys, and teddies.

The Tower of London was founded by William the Conqueror in 1066-67, and enlarged and modified by successive kings and queens.

“During its 900-year history it has been a royal palace and fortress, prison and place of execution, mint, arsenal, menagerie and jewel house,” according to the official website.