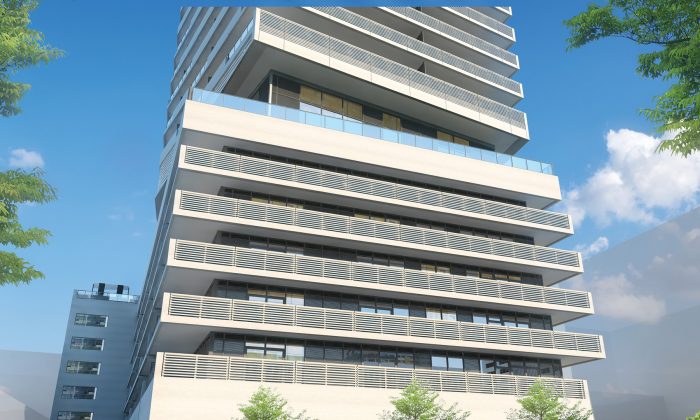 Modernist relief for the glass tower hangover
By Zoe Ackah

Are we on the verge of a glass tower hangover? In our journey toward world-class status, and all the density and innovation that implies, we sure have made Toronto sparkly.

When Russell Masters, vice-president of Tower Hill Developments, was presented with the opportunity to build a high-rise at Yonge St. and Eglinton Ave. he knew what he didn’t want.

“We didn’t want another glass tower or something that looks like an office building,” Masters said. “There’s such a plethora of condominiums being built here, they’re all starting to look the same. … For 2221 we wanted something new.”

Masters and Sandi Pei hit it off immediately. “My brother and I knew we found who we wanted,” said Masters.

Earlier this month, the initial renderings of the project were made public. Sandi Pei and Pei Partnership principal Toh Tsun Lim visited our humble little hamlet to unveil their vision for 2221 Yonge.

“We were immediately taken by many of the traditions here in condo development,” said Pei.

The Pei team detailed how they set about creating their contribution to one of Toronto’s busiest intersections.

The 2221 Yonge building will pay homage to two things: the Tower Hill buildings Masters’ grandfather built on Spadina Ave., and their inspiration—Modernism.

Tower Hill East and West were built in 1967 and 1969. They are classic Modernist architecture. Pei suggests: “Earlier modernist buildings stand out … are worth plumbing for ideas.” Pei and Lim were looking to draw on tradition, and give it something fresh.

Like all good Modernism, functionality and pragmatism truly inform the design. The most striking details that add immediate benefit to both residents and the local environment are the proposed lobby, the shape of the building, and it’s wraparound balconies.

The dark office block and, sorry to say, shabby retail space that are the streetscape now will be injected with light. The lobby of the new building will be walled in glass on both Yonge St. and Cowbell Lane.

Pedestrians will be able to see right through the building, as well as access the retail space. This openness and transparency “give [more to] the public precinct,” says Pei, as do the many considerations the team took to make the project a huge improvement at ground level.

“We made a very long, lean massing,” explains Lim. The very narrow, long building shape creates distance and privacy to allow for close proximity to the Midtown Minto buildings to the south of 2221 Yonge without either compromising privacy or sunlight on the sidewalk.

Wraparound balconies, again a nod to the original Tower Hill buildings, are canted on the south side that neighbours the other tower. According to Lim, the bend in the façade helps to “direct the views away from the adjacent towers and more to the south. It gave more interesting shape.”

Made of white pre-cast concrete tabs and glass, the large balconies are the “articulated impression” of the building. “We created upturned tabs to manipulate the façade and create different areas of privacy and openness,” said Lim.

Overall the Pei team, with support from Les Klein at Quadrangle, feel they have created a building that acknowledges tradition and also fits well into what Pei calls “the fabric of the city.”

• A 56-storey tower sits askew on a six-storey podium
• Interiors and amenities by Munge Leung
• Amenities will include a 56th-floor sky lounge and Toronto’s residential spa, a resort-inspired space that features three pools
• A grand porte-cochere and double-lane drop-off provides access to the extra wide lobby where front and rear entrances converge
• 566 suites from 386 to 997 square feet in studio, one-bedroom, one-bedroom with den, two-bedroom, two-bedroom with den, and three-bedroom configurations
• 24 hour concierge
• www.2221yonge.com
• Prices start at $199,900