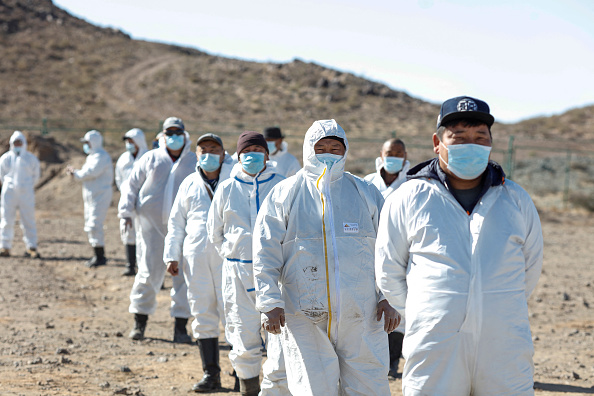 Truck drivers waiting to undergo tests for the COVID-19 coronavirus near Gants Mod port at the Chinese border with Gashuun Sukhait, in Umnugovi province, Mongolia, on Oct. 16, 2021. (Uugansukh Byamba/AFP via Getty Images)
INSIDE CHINA

Former lawyer suspects the lockdown a set up
By Xiong Bin

Officials transferred more than 9,500 stranded tourists from a scenic site in Ejine Banner of Inner Mongolia to different destinations for 14-day quarantine for medical observations, according to the Chinese media report on Nov. 3.

The local authorities locked down the banner, an administrative unit akin to a county, upon the resurgence of the CCP (Chinese Communist Party) virus in the westernmost border of Inner Mongolia in mid-October.

However, an online video on Nov. 15 shows how after the quarantine, tourists tried to leave the hotel by exiting a door, but a police officer sat by the door and blocked their way. The tourists are also heard shouting “the police are hitting people” in the background.

Mr. Geng is one of the stranded tourists relocated to the quarantine hotel.

Geng was referring to a designated quarantine hotel in Alxa League, Inner Mongolia.

He told The Epoch Times that there’s no place to file a complaint, and they were blocked from leaving without paying the fees.

A staff member of a quarantine hotel in Alxa Left Banner told The Epoch Times that the price of each hotel varies. A room of theirs is priced at $28.23 per day. The quarantined person can leave only after the hotel receives full payment.

Another tourist, Mr. Le explained to The Epoch Times that the room cost approximately $15 and $32 per day.

He said, “I could go with the price at $15 as a supportive response to the government’s pandemic prevention measures.”

Le added that most tourists were the elderly and they believed mandatory quarantine should be free and that’s why the conflict broke out.

A tourist posted a personal experience online on Oct. 16, stating how the officials deceived the public on the compulsory quarantine measures.

According to the post, the county was suddenly put on lockdown on the morning of Oct. 18. After being stranded in Ejina Banner for 12 days and having had 9 nucleic acid tests, tourists were forcibly transferred to Langway Hotel in Alxa Left Banner.

It said, “Every room was sealed with paper strips.”

The post also mentioned that tourists were trapped into writing a statement saying that the quarantine was voluntary.

It wrote: “The authorities played with words, disregarding Article 41 of the ‘Law on Prevention and Treatment of Infectious Diseases,’ just for the purpose of charging the fees. We could not leave without paying! They should be ashamed!”

The Epoch Times confirmed with the Alxa League authorities on Oct. 16 that full payment must be received before the tourists can leave.

When asking if the tourists were under compulsory quarantine, the reporter was referred to the prevention and control center. However, no one answered the phone.

Geng said that they had been quarantined in Ejine Banner for 13 days. Local authorities sealed their doors with paper strips to prevent them from leaving their rooms. They were later relocated to Alxa Left Banner for another 14-day quarantine.

He said that his hometown quarantine station was free of charge, but they were forced to stay in Inner Mongolia for another 14 days.

He described how police treated them like prisoners during the relocation on the 13th day of the first quarantine. There were police cars in the front, in the back, and in the middle of the shuttles.

Former Chinese lawyer Li Zhuang discussed his observation of the incident in his social media post.

He suspected that the lockdown was a setup by local officials to force tourists to contribute to local finance.

He also questioned the fidelity of repeated quarantine by local governments.

His post reads: “Provinces and cities across China should coordinate quarantine measures.

That’s a total of 68 days of isolation.

Li also stated in another post that the local authorities deleted the warning of a local resurgence of the pandemic on Oct. 21, and subsequently thousands of tourists flooded in the scenic site unknowingly.