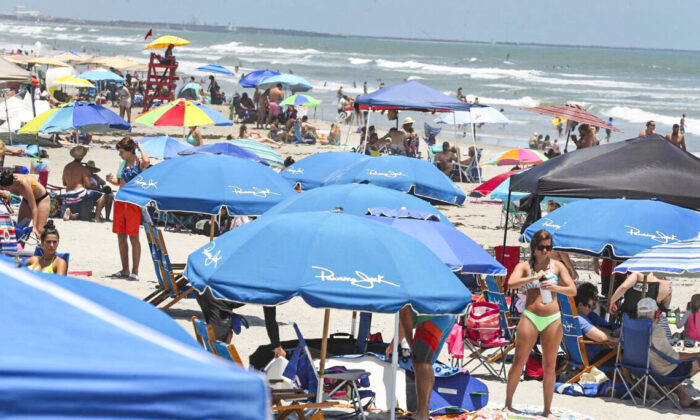 Tourists Flocking to Florida in Greater Numbers Than Before Pandemic

More than 32 million travelers poured into Florida in July, August, and September, exceeding the number of visitors during the same period in 2019 before the CCP virus pandemic.

It was the second consecutive quarter of growth in domestic visitors, with 31.2 million Americans flocking to the Sunshine State in the third quarter of the year, according to Visit Florida, the state’s official tourism marketing corporation.

That number was up from pre-pandemic numbers by almost 7 percent.

Meanwhile across the country, the total number of domestic travel trips was expected to reach 85 percent of the 2019 level, according to the fall forecast of the United States Travel Association.

And international arrivals to the U.S. overall were expected to reach only 27 percent of pre-pandemic levels.

In 2019, U.S. domestic travel had increased 1.7 percent, with the number of trips taken reaching 2.3 billion, the report showed.

Leisure travel accounted for 80 percent of all travel. International visits experienced a 0.7 percent downturn in 2019 but still accounted for 79 million trips.

That year, domestic and international travelers spent $1.1 trillion in the U.S.

The industry was supporting nine million jobs in 2019, and generated $277 billion in payroll and $180 billion in tax revenues for federal, state and local governments.

Then COVID-19 struck, and tourism ground to a halt.

Domestic trips across the nation are predicted to finally climb out of the slump caused by the Chinese Communist Party (CCP) virus in 2023, and finish with growth three percent above pre-pandemic levels.

International arrivals are not expected to recover to 2019 levels until 2025.

But tourism is charging forward again in Florida. About 1.2 million visitors traveled to Florida from overseas, and 85,000 came from Canada during this year’s third quarter.

While tourism in other states was practically paused, Florida aggressively marketed outside its borders for seven months and saw steady growth in visitor volume each quarter.

“In 2020, the experts thought Florida’s economy would be among the most impacted in the nation, because of how important tourism is to our state,” said Gov. Ron DeSantis. “Instead, we are setting the pace for job creation and visitation in the U.S.

“We have been able to set these records because, in Florida, we kept businesses open and made sure Floridians could keep working. In just 15 months, Florida’s visitation numbers have surpassed past pre-pandemic levels, helping drive revenue, job growth, and economic activity to all 67 counties in our state.”

The influx of visitors “is a huge win for our state and has pushed the recovery of Florida’s tourism industry to new heights,” said Danny Gaekwad, owner of MGM Hotels and chair of the Visit Florida board of directors.

“Florida regularly outperforms the nation in hotel occupancy, demand, and revenue, and is an undisputed leader in the U.S. travel sector,” Gaekwad said.

“We are incredibly grateful for Gov. DeSantis for paving the way to this success and allowing our tourism community to thrive.”