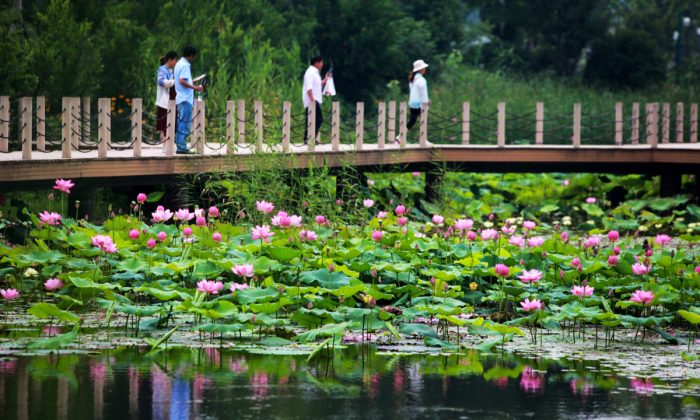 A nature-park was forced to cancel it’s seasonal opening after droves of tourists stole the main attraction.

Tourists took pictures of themselves walking out of the park with handfuls of lotus flowers, picked from the watery fields where they grew, according to pictures on Chinese social media.

The lotus flower gardens extend for around 50 acres (20 hectares)—an area about the size of New York’s Grand Central Terminal.

However, much of this year’s bloom was plucked away by hundreds of flower hoarders before the rest of the park’s would-be visitors could enjoy them.

The park had been closed and fenced off since March 25 for construction, but that didn’t not stop certain individuals from climbing in.

As a result, the park said it would have to  close for the rest of the season due to the damage to their lotus display.

“We’ve already repaired the fencing five times this year,” one of the managers at the park told Red Star News.

One employee at the park, surname Zhou, said that the staff at the park were doing the best they could about the situation.

“We can’t control the tourists,” Zhou told Red Star News. “We put messages up on the park gate and near the flower fields, and we also have security guards on patrol.”

Although the construction work is almost complete, park owners said there was now no reason to open the park since all the flowers were missing, Zhou told Red Star News.

It is estimated that between 200 to 300 people may still be breaking into the park on a daily basis. The park’s management said it has increased its number of security guards in response.

Photos posted by the people stealing stalks of lotus flowers from the ponds in Longqiao Park drew harsh criticism online, with people saying that the flower hoarders had ruined the park’s main attraction.

“Even the highest fence cannot stop those without manners. It’s like you can never wake up a person that pretends to sleep,” one Weibo user said.

“Only penalties can stop these greedy people,” said another.