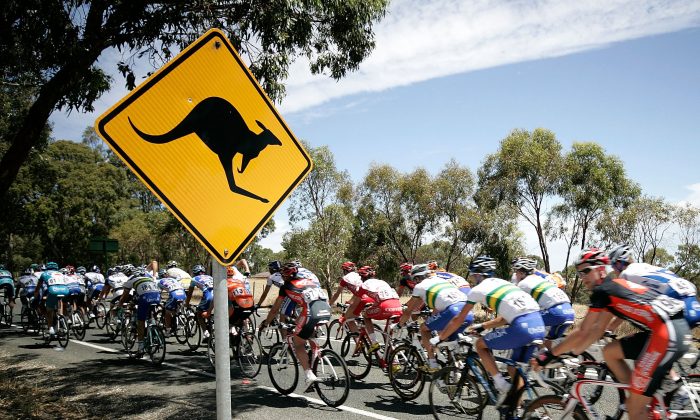 A tourist visiting Western Australia shot a hilarious photo of a kangaroo seductively lounging in front of a public bathroom. (Pool/Getty Images)
Australia

A French tourist visiting Australia was surprised and perhaps a little scared to find a muscular kangaroo striking a pose at the entrance to a restroom she was trying to use.

Sandrina Duniau, 30, encountered the marsupial when she went to use the bathroom during a visit to John Forrest National Park in Perth, Western Australia.

“It was right in the middle of the toilets blocking the entrance to the doorway and there was no way I was brave enough to go and bother it,” Duniau said, according to the Daily Mail.

“I love all the animals here and I’ve been having so much fun taking pictures of all the warning signs for snakes and other dangerous creatures to scare my family back home. It’s so wild,” she said.

According to government data from 2011, the most recent year for which there are published statistics, there were 638,185 red Kangaroos in Western Australia. They are not considered threatened or endangered.

The red kangaroo is the world’s largest marsupial, and can be as small as 3 feet and over 6 feet from head to toe. They often travel in packs, called mobs, and are hunted for their meat. Some farmers consider them pests.

Another kangaroo, dubbed the “bodybuilder,” made news last October when it was spotted in Western Australia.

The giant animal was bathing in a creek, and the man who came across it said it made threatening moves toward him and his dog. He said he normally isn’t afraid of kangaroos but took a step back when the kangaroo started to come out of the water toward them.

One of the defense moves kangaroos will use on a predator is to run into the water and when their predator follows, to hold the predator under water till it drowns.

Meanwhile in Australia… we have animals that look like bodybuilders ? #straya https://t.co/jGXjrCgpFU pic.twitter.com/lmINlYt7Bs

Fearing that the kangaroo was going to drag his dog into the water and drown it, he quickly put the dog inside, reported News.au.com.