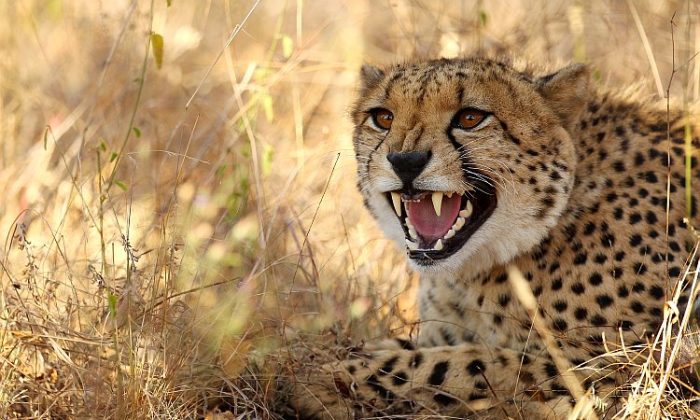 A Scottish tourist was mauled over the weekend at a South African game park by a cheetah that was supposedly tame, suffering cuts and other injuries, according to media reports.

Violet D’Mello, 60, of Aberdeen, played dead after she was attacked by two cheetahs at the Kragga Kamma Game Reserve near Port Elizabeth, the Daily Mail reported.

The cheetahs, named Mark and Monty, were raised by humans from the time they were young and were said to be tame. One of the animals attacked an 8-year-old girl who was in the petting enclosure. Afterward, her 7-year-old brother began to run, and D’Mello tried to stop him and was attacked from behind.

“‘I never imagined it would attack me because I was an adult. But the next thing I knew I was on the floor and the cheetah was right on top of me,” Violet D’Mello was quoted as saying. “It started scratching me really badly and then I could feel the other one come up too and one of them got my neck in its mouth.”

She then played dead and “someone came and chased them off me and my husband picked me up off the floor,” D’Mello said, according to the Daily Mail.

“They weren’t being vicious. You could tell they [the cheetahs] were just excited, but it became serious very quickly,” she told the Port Elizabeth Herald.

Her husband took photos of the incident, saying he did not realize at first that they were attacking her.

Park Manager Mike Cantor told the Herald that it was unclear what caused the attack.

“It’s not something we’ve ever really experienced. It’s obviously very unfortunate, and we’re looking into what may have startled or riled up the cheetahs,” Cantor told the publication.

“We’ve had these animals for four years,” he added. “Dozens of people have come through here and seen them and fallen in love with them, so it pains us to hear about something like this.”