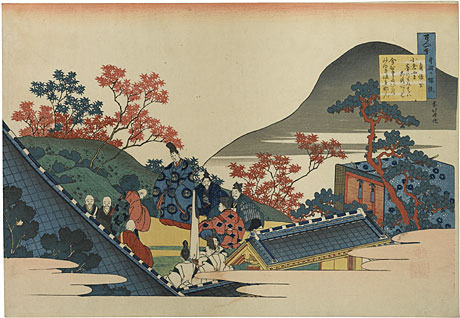 An idyllic villa print by Katsushika Hokusai, 1760-1849, part of the Scholten Japanese Art collection. The poem is by Fujiwara no Tadahira (880-949), was commissioned as an eloquent invitation to the Emperor Daigo to visit his father at Mount Ogura in autumn. Value: $16,000. (Courtesy of Scholten Japanese Art)
US

Touring Through Centuries of Asian History

If the maple leaves
On the ridge of Ogura
Have the gift of mind,
They will longingly await
One more august pilgrimage

A group of a dozen or so reporters, bloggers, and designers got a sneak peak at the collections presented during Asia Week, which began on March 16 and will end on March 24. Each collector highlighted his or her prized pieces in about 15 minutes, before it was off to the next gallery.

Arakarishi
Kazenonochiyori
taenureba
kumodenisugaku
itoniyaaruran
You stopped visiting me since that stormy day
Just like the spider’s web that is about to break
Is your love fragile?

“Even though some of these poems … are hundreds of years old, what is amazing to me is that the heartbreak is so universal,” mused Martin.

She translated an 11th century poem by Minomoto no Kunizane, transcribed on a hanging scroll and decorated with gold and silver in the 13th century by Fujiwara no Tameie.

You stopped visiting me since that stormy day
Just like the spider’s web that is about to break
Is your love fragile?

Collector Eric Zetterquist’s eyes beamed from behind his dark, thick-rimmed glasses as he discussed the “soulful glazes” of Song Dynasty (960–1276) ceramics.

Song ceramics are “one of human art history’s great achievements,” said Zetterquist of the Buddhist-inspired works. They “distill the essence of great form and soulful glazes to their highest level,” he said.

He also explained that the pure white porcelain China is known for came into being in the 14th century after centuries of trying to create a white medium to rival the purity of white jade.

Yang also explained the creation of Courage and Joy’s pottery—the way the glaze dripped, crackled, and shrunk in different ways.

When at last lunchtime arrived, at the Mark Murray Gallery on East 72nd Street, Jiyoung Koo and Michael C. Hughes presented a delectable spread of food and artifacts. Hughes has a rare 1933 Korean genealogical painting, with three patriarchs at the top and six generations of their progeny below—and a Model-T Ford in the center.

Emperor Puyi ordered a Model-T Ford Cadillac in 1932, helping date the painting to 1933.

Buddhism is naturally a common theme in Asia Week collections, and many galleries had not only the wares of Buddhist temples, but also the atmosphere. Incense burned in some, as it would have in the original homes of the artifacts.

Leonardo Vigorelli described a Buddha statue from the late 9th, early 10th century made near the birthplace of the Buddha on the border of India and Nepal. It exemplified the iconography known as “Buddha and Companions,” with two angels above and two Boddhisatvas holding blue lotus flowers below. He pointed out a patina on the Buddha’s feet from the touch of worshipers.

“Buddhist iconography is so beautiful, peaceful, attractive,” said Vigorelli. “In some ways it is more pure than the English iconography.”