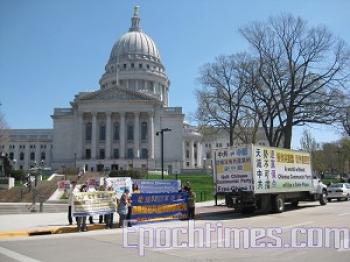 The tour's truck with rally participants outside the state capitol building in Madison, Wisconsin. (The Epoch Times)
US

A tour to bring news of 53 million people having quit the Chinese Communist Party is touching the hearts of Chinese and Westerners in major cities throughout the Midwest.

According to Tommy Xu, one of the tour’s organizers, “The tour has been a big success.”

The tour consists of a truck that has slogans on the side calling attention to withdrawals from the Communist Party and Mr. Xu, Mr. Zheng, and Ms. Yang speaking about why withdrawing from the CCP is important, along with speakers local to each city.

Zheng suffered severe torture in China because he practices Falun Gong. At stops along the tour, he recounts how, after one bout of four days of continuous torture his hair fell out and his weight sharply dropped.

He also tells of being held in a “small cell” (a cell too small to allow the prisoner either to stand up or sit down) for a month, after which he nearly lost his sight and could barely walk.

Zheng feels it is very important for Chinese people in particular to hear his story.

“Telling what I suffered in prison will help the Chinese people understand the evilness of the CCP. Many Chinese people turn their heads away from what is happening in China, and have illusions about the CCP” Zheng said.

According to Zheng, some Chinese people in the United States do not want to know what is happening in China because of the way the CCP has affected them.

“They think that the persecution of Falun Gong has nothing to do with their lives. However, that they don’t want to know what is happening in China is in fact a symptom of how they have been affected by the CCP. By telling our stories, we help Chinese people understand their own fear,” Zheng said.

Xu says the rallies are having a good effect on Chinese people. “When they see the truck, some are shocked. They may stare and take a picture. Others will smile.”

“The Chinese people who see the truck and the rallies, they don’t get angry. This is a big change from just a few years ago. Before the Chinese people would identify the CCP with China itself and it was hard for them to listen to criticism of the CCP. Now they accept what we say,” Xu said.

Zheng tells of a Western policeman in St. Louis who was listening intently to his talk. While he was talking, this policeman mouthed the words, “We are here.”

“I believe he meant ‘We are here to protect you. We won’t let that happen to you anymore.’ I was moved to see his reaction,” Zheng said.

“Here in the United States we have the freedom to practice our belief and say what we think. If we did the same thing in China, we would end up in prison,” Zheng said.

According to Xu, “American people support us very much. Wherever we drive, we get a big ‘thumbs up’ from passersby. The American people want to see the message of our tour.”

Zheng agreed, “When we have a rally, many Westerners will stop and listen. When I tell of my experiences in China, they are shocked. Many stay behind to ask me if what I am saying is true. When I tell them it is. They get angry.”

Grace Wu hosted the rally held on the steps of the Wisconsin State Capitol in Madison, Wisconsin. She said, “Many people hung around and stuck around to the end. It turns out that they know a lot about what is happening in China and are appalled that the persecution of Falun Gong is not reported more in the media. They feel it is very much ignored by the mainstream media.”

In Madison, the president of the Wisconsin Tibet Association spoke at the rally. Ms. Wu said, “He recognized how important it is for Tibet that everyone understands the nature of the CCP. And so he wanted to join.”

On Friday the tour visits Columbus and Cleveland in Ohio, and then finishes on Saturday in Ann Arbor, Michigan.