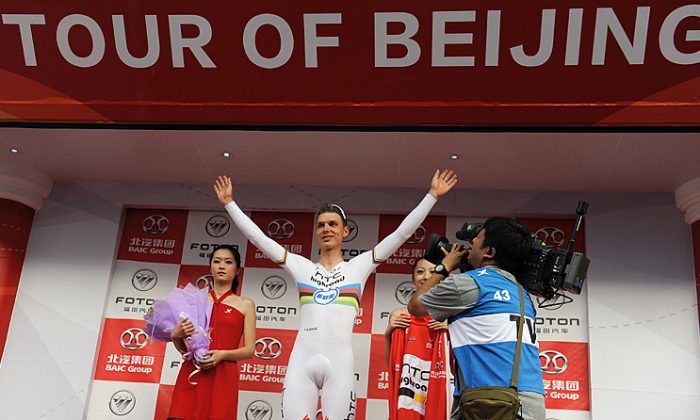 Tony Martin (C) will be back to defend his 2011 Tour of Beijing title, riding for Omega Pharma-Quickstep this year. Here he celebrates on the podium in Beijing, October 5, 2011. (Liu Jin/AFP/Getty Images)
Cycling

The five-stage Tour of Beijing, the last World Tour race of 2012, starting October 9, offers one more chance for elite professional cyclists to grab some glory before the season ends. Riders will cover 755 km or 469 miles, starting in the dangerously polluted atmosphere of Beijing’s Tian An Men Square, before heading west, then north towards the Great Wall and east to the conclusion in the city of Pengdu.

While the first stage, through Beijing, is totally flat, the rest of the race includes some serious mountains including a summit finish in Stage Three. While none of the climbs rival any of cycling’s famous Alpine ascents, riders will be tested nonetheless.

Omega Pharma Quickstep’s Tony Martin, the 2011 winner, will also return. He told tourofbeijing.net, “As the Tour of Beijing doesn’t include a time trial any more, my chances to repeat my victory are a bit tight. However, I will try again and keep fighting.”

Most teams are sending eight riders, some only seven. Sky’s team is only five; Bradley Wiggins, Chris Froome, Ritchie Port and the rest are too exhausted, unfortunately. Vuelta a España winner Alberto Contador will also sit this one out.

Andy Schleck missed most of the 2012 season after crashing in the Critérium du Dauphine in June. “To many riders, the Tour of Beijing is the last race of the year, but to me this is a new beginning,” he told tourofbeijing.net.

“After I fractured my hip in June it has taken time to recover but my pain doesn’t bother me riding anymore. I am very happy to be back to the peloton, to my team, to a professional rider’s life, to put a number back on my jersey. “

“The Tour of Beijing is for my team and myself is a great opportunity to ride with world class athletes we see on television and in the newspapers,” rider Xu Gang told the pre-race press conference on the web.

“To be honest, the race will be difficult as we haven’t experienced the UCI WorldTour level before. But I will do my best for sure. Given I am not fast enough in the sprints I would like to show myself in the mountains stage in the north of Beijing.”