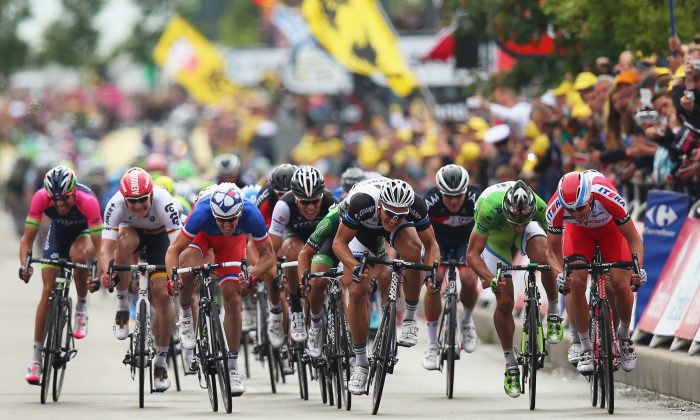 Giant-Shimano sprinter Marcel Kittel was the fastest man on a bicycle for the third for four stages of the 101st Tour de France Tuesday, winning Stage Four by eighteen inches.

After Giant and Omega Pharma-Quickstep battled through the final kilometers to control the peloton, it was Katusha’s Alexander Kristoff who came out ahead in t he final kilometer, but he launched too soon. In a five-wide race to the finish, Kittle just caught Kristoff, with FDJ’s Arnoud Demare a foot further behind.

Cannondale’s Peter Sagan came back from a late-race mechanical to catch the leaders and finish fourth, with Europcar’s young sensation Bryan Coquard right on his wheel.

“Everything I was thinking about was that last corner,” Kittel told MSNBC. “They told me that just before the finish, at 250 meters, I could see the finish line. I was almost tempted to go already at 500 meters because I could not really see where it was, but then I had to sit down again.

“I went really long. It was everything I had. It was really, really difficult.”

The Giant leadout train, supposedly the best in the business, couldn’t wrest control from Omega, which is without its star sprinter Mark Cavendish but is still proving to be very strong. For the second day in a row, omega formed up a little too soon and ran out of gas a few hundred meters too early; Mark Renshaw finished seventh despite being ahead of Kittel at the start of the sprint. If Omega can refine their timing, Giant could be in trouble.

Katusha also showed that it had the capacity to contend with Giant, taking control in the final kilometer and nearly winning the race. If Katusha had had one more rider or waited another ten seconds, Alexander Kristoff might have taken the stage.

Another threat revealed was FDJ’s Arnoud Demare, who came from a long way back to catch the leaders at the line. Demare was still accelerating at the finsih; had he started ten meters sooner the stage might have been his.

Kittel acknowledged that he was lucky to have won his third stage.

“I think today we saw that we are not unbeatable: that we always need to plan, to focus, and to concentrate on our sprint and our preparation for the sprint.

“It was close today.”

Defending champion Chris Froome of Team Sky crashed five kilometers into the stage when two riders next to him in the peloton bumped, sending one into Froome. The Sly leader fell hard on his left side, the same side he landed on when he crashed during the Critérium du Dauphiné early in June.

Froome bounced right back up, but had considerable road rash on his left hip and elbow, and needed a brace for his left wrist. The 29-year-old Kenyan seemed unbothered through the rest of the stage, but often the pain and stiffness don’t set in until after the day has ended.

Worse luck for Froome, the Tour heads onto a cobblestoned stage Wednesday. Stage Five has nine sections of pavés, which will challenge both bike and rider with brutal pounding. Froome will take a beating; any sore parts of his body will probably hurt worse Wednesday night than the night after his crash.

His wrist is of special concern; bumps and bruises can heal while riding, but depending on the nature of his wrist injury, it could get worse with each passing day, and the cobbles will be especially harsh on it.

The most serious climbing stages don’t come until the final week of the race. Hopefully, whatever Chris Froome’s injuries, they will be fully healed by then.