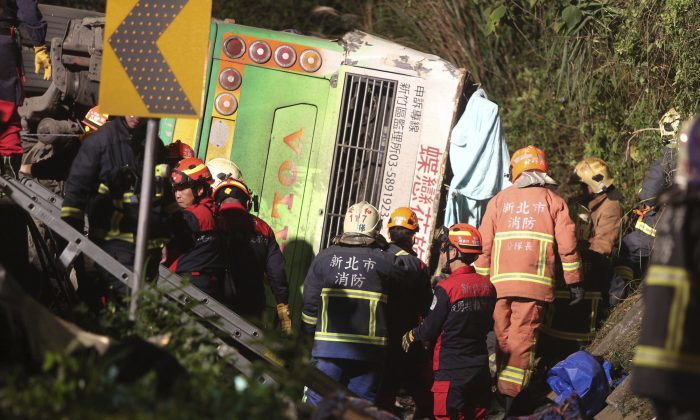 Members of rescue team at the scene where a bus collided with a car on a highway in Taipei, Taiwan on Feb. 13, 2017. (AP Photo)
News

TAIPEI, Taiwan—A bus carrying Taiwanese tourists on a trip to view cherry blossoms flipped over on an expressway ramp in Taiwan’s capital on Monday, killing 32 people and injuring many others, officials said.

The bus was carrying 44 people when it crashed Monday evening on the No. 5 expressway, the Taipei city fire department said. It said authorities were still trying to determine the cause of the accident.

“It happened on a curve, so the bus flipped and that could be due to excess speed,” said Tu Bing-cheng, a Taipei city official. “The whole frame of the bus changed shape, got crushed and left no openings.”

Many passengers were trapped under the crushed bus, and rescue personnel used a crane to pry the vehicle open.

Thirty-two people, all Taiwanese, were confirmed dead and the remaining passengers were sent to hospitals for treatment, Tu said.

The bus belonged to a private company, he said. It was taking tourists back from a trip to see cherry blossoms when it crashed, Taipei city Deputy Mayor Teng Chia-ji said.