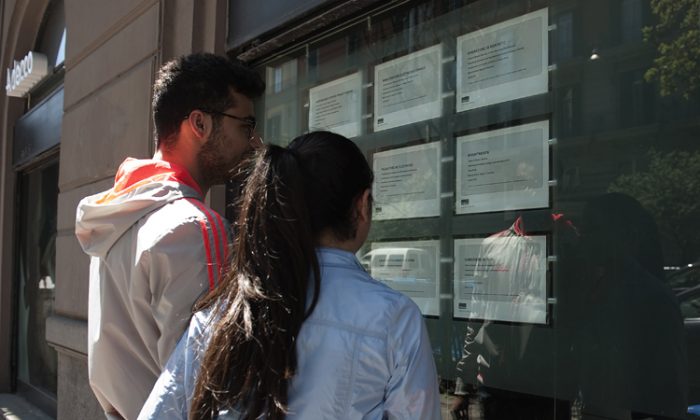 Two people look at job announcements on the window of an agency in Naples on May 3, 2012. Italy's unemployment rate hit a record of 9.8 per cent in March, as a recession in the eurozone's third-biggest economy deepens. (Anna Monaco/AFP/GettyImages)
Business

Following the release of the latest European Union unemployment figures, the Federation of European Employers (FedEE) says that more resources should be directed at the traditional industrial heartlands of Europe. Emphasis in education should also move towards the development of practical vocational skills.

At a meeting of top international employers last week, Robin Chater, secretary-general of the FedEE, said toughness, determination, and flexibility were the three golden qualities key to achieving economic success and reducing unemployment, according to a a summary of his speech published by the FedEE.

Unemployment in the eurozone reached a record high of 10.9 per cent in March, according to a May 2 statement by Eurostat, the statistical office of the European Union. This increases to 22.1 per cent for those under the age of 25. It estimated that 17.365 million men and women in the euro area were unemployed.

In his speech, Chater said that areas that were leaders in the historical industrial revolutions, such as the UK and Germany, were now struggling to adapt to the modern-day needs for flexible automation and mass customisation.

“Major structural changes are therefore at work which is adversely affecting regions with the oldest capital infrastructures and placing at an advantage many previously economically undeveloped regions,” Chater said.

He gave the example of how the resourcefulness and flexibility of Ireland enabled the country to develop rapidly from a rural backwater into a tiger economy during the 1990s. It was the credit crunch of 2008 and mass government debt that ended their economic success.

Low levels of education is linked with high unemployment, and statistics show this is true for every member state of the EU, Chater said. Less than half of of those with only basic secondary education (44.6 per cent) are employed, compared to 68.1 per cent for those with higher school or intermediate qualifications, and 81.8 per cent for those educated at a university.

Climate and geography were also mentioned as factors in unemployment levels. Chater said that people living in mountain regions tend to be more resourceful, frequently have more than one job, and make the most of seasonal variations.

This was verified by the fact that the four regions in the EU with less than 3 per cent adult unemployment are in Austria, Italy, and the Netherlands. Outside the EU two regions located in Norway and Switzerland also have an exceptionally low unemployment rate.

“What five of the six regions have most in common is that they all lie within mountainous zones – regions often most associated with poor employment prospects,” Chater said.

With regard to low unemployment, Chater suggested that people who are hardy are more likely to find employment, which was more important than good natural resources, communications, climate, and even a higher education.