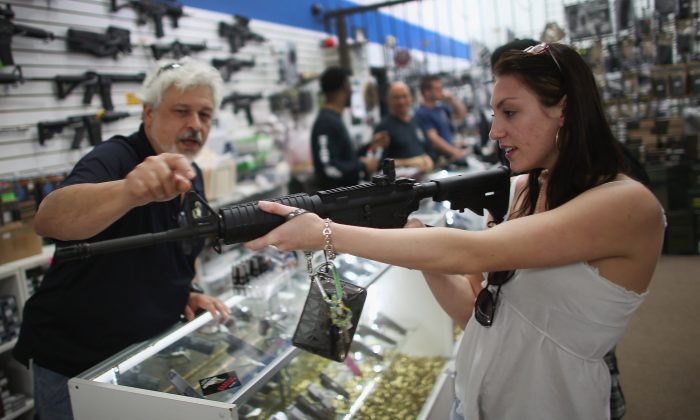 With the Senate likely to vote on a bipartisan bill to toughen federal gun controls, Americans should remember that the effectiveness of government regulations has limits. Ultimately, new laws will give Americans a false sense of security and further delay efforts to address cultural dysfunctions that give rise to so much violence.

With millions of guns in circulation, background checks for owners and federal surveillance of every single sale—by a dealer or private individual—won’t keep guns out of the hands of deranged individuals.

Too often, the children and other acquaintances of perfectly sane gun owners can get their hands on weapons and instigate hideous events.

Locks don’t stop thieves—just slow them down. Individuals bent on getting their hands on a gun, will—unless the federal government can find a constitutional way to make most guns illegal and that is not going to happen. The Senate bill and much of the legislation proposed or recently passed in more progressive states like New York can’t change that.

A hard reality advocates of strict gun controls won’t address is that automatic rifles of the type used in Newton and other tragedies are necessary for the protection of law-abiding adults in rural areas and many other locations. A handgun is not much use when confronted by multiple armed intruders at 2 a.m., and a police response—even triggered by a home security system—is 20 minutes to an hour away. Only a weapon that can fire multiple rounds quickly will suffice.

Absolutely limiting the size of ammunition clips would help, but if a deranged person can steal an automatic weapon, he can surely manage to get his hands on one of the many large clips that will remain in circulation or manufactured illegally—those are just not that difficult to make.

Labeling folks receiving mental health care a danger to society, for the purposes of gun transactions, tramples all kinds of constitutional privacy protections. Even if authorities could get mental health professionals to fully cooperate, which is doubtful, the overzealous application of danger to public safety designations would pin scarlet letters on otherwise harmless citizens.

With employers using sophisticated background checks to screen potential new hires, innocent citizens seeking help with emotional problems—ranging from mothers fearful of fathers snatching children in custody disputes to disaffected employees expressing angst about their boss—could be designated a danger and locked out of the job market.

Obsession with electronic diversions by children and young adults is symptomatic of more basic problems. Too many young people are simply riveted to keyboards and screens, because we build schools and communities that impose obstacles to healthy physical recreation that occupied youth in generations past—after school baseball has been replaced by after school video violence, and parents in two career families are too absorbed and stressed to adequately supervise and steer children into healthier activities.

Making schools safer sounds great but unless we want to arm our teachers with automatic weapons or turn our schools into walled fortresses—akin to prisons—schools will remain porous and new security will raise education costs much more than accomplishing greater safety against threatening intruders.

President Obama, Sens. Schumer and McCain, and many others in public life will likely herald the passage of a new federal gun law as great progress. Americans, who too often confuse bustle with thought and movement with progress, will take great comfort until the next tragedy takes its toll.

Peter Morici is an economist and professor at the Smith School of Business, University of Maryland, and widely published columnist.