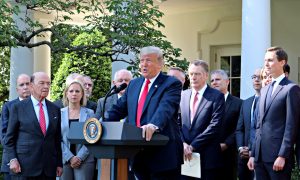 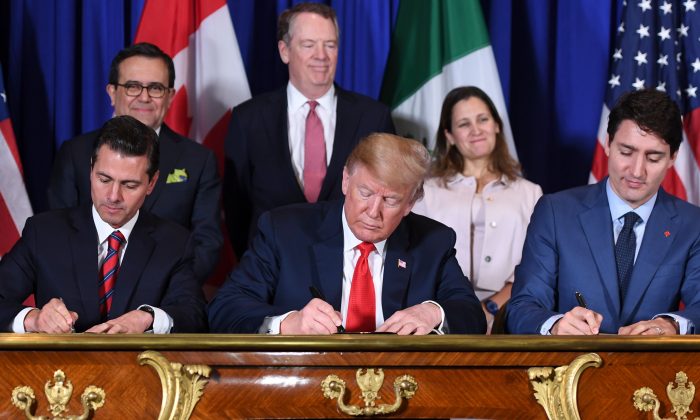 Tough Road Ahead Likely for Passage of USMCA

WASHINGTON—While Democrats are skeptical about the new trade agreement with Mexico and Canada, President Donald Trump is confident that the U.S. lawmakers will vote for it soon.

Otherwise, there would be no free trade deal, he warned.

“I think that it should get approved pretty quickly by Congress because it is a great deal,” Trump told Fox Business’s Maria Bartiromo in an interview on March 22.

If the Democrats don’t vote for it, he said, “maybe you go pre-NAFTA. NAFTA was one of the worst trade deals ever made.”

After signing the trade deal on Nov. 30 last year, Trump said he would give formal notice to the U.S. Congress to terminate NAFTA. He also gave U.S. lawmakers six months to approve the USMCA. Lawmakers could choose between approving the new deal and returning back to pre-NAFTA trade rules, he said.

Democrats, who now control the House, already have indicated they won’t vote for the agreement. They have called for stronger enforcement provisions for labor and environmental standards. Some also hesitate to hand Trump a political victory by approving the deal.

“It looks like it’s going to be very difficult to get the votes in the House to approve,” Stephen Moore, a visiting fellow at the Heritage Foundation and former economic adviser to Trump’s 2016 presidential campaign. “We may not even get Nancy Pelosi to bring it up for a vote. So I’m really concerned about that.”

He suggested that Trump should go back to NAFTA until the USMCA gets approved. Going back to pre-NAFTA, he warned, would be a “very bad” idea, as it would hurt the economies of all three countries.

“We need the trade routes open and free between Canada, the United States, and Mexico,” he said.

And if Congress fails to approve it, Trump could use that as a weapon in the elections and tell American people that Democrats blocked a good deal, he said.

The USMCA, signed by the leaders of the United States, Mexico, and Canada, must be approved by the congresses of each country to take effect.

The congressional work on the deal will start next month with a study by the U.S. International Trade Commission to analyze the economic effects of the deal. The Mexican government has agreed to amend its labor law to comply with the agreement, which is expected to happen in April as well. Mexico’s ambassador to the United States, Martha Barcena, reaffirmed this commitment in a speech in February.

The AFL-CIO, the largest U.S. federation of labor unions, echoes complaints from Democratic lawmakers. The labor federation argues that the new NAFTA has some modest improvements but it requires strong labor rules and enforcement mechanisms.

The AFL-CIO said in a statement on March 14 that it wouldn’t back the congressional passage of USMCA unless Mexico fully reforms its labor laws to conform to the deal.

“The new NAFTA does little to stop the continued outsourcing of U.S. jobs to Mexico across all sectors,” the AFL-CIO said, adding that the companies would continue to close plants and hurt workers.

The USMCA contains new “rules of origin” on cars, which incentivize the use of high-wage labor in auto manufacturing. The treaty requires a significant portion of the content of autos to be made by workers earning $16 an hour. This provision aims to boost production in the United States and Canada, since the average manufacturing wage in Mexico is significantly lower than $16.

The agreement also requires all trading partners to comply with International Labor Organization labor-rights standards. For example, the agreement requires Mexico to make it easier for workers to have unions and collective bargaining rights. It also states that each country should provide acceptable conditions of work, with respect to minimum wages, hours of work, and the health and safety of workers.

More than 200 companies and associations representing businesses, manufacturers, and farmers across the country started the “USMCA Coalition” to help ensure passage of the new trade agreement.

The Pass USMCA Coalition, another business advocacy group, recently launched a television and digital advertising campaign highlighting the benefits of the agreement and encouraging voters to urge their congressional representatives to approve the deal.

According to a survey conducted by Morning Consult, 51 percent of respondents want Congress to pass USMCA, compared to only 14 percent who oppose approval of the deal.

Supporters hope that lawmakers will approve USMCA this summer or at least before the August recess.

Some trade experts believe that the USMCA has strong labor rules, which makes the deal an important milestone for international trade.

The new deal is “a significant accomplishment” for Trump, according to Edward Alden, a senior fellow at the Council on Fore­­­ign Relations. In an article originally published in Politico Magazine in October, Alden argued that Trump succeeded in altering the agreement in ways that Democrats and unions for years had longed for.

“The unions have opposed every major trade deal for the last 40 years,” he wrote. “But with the new NAFTA [USMCA], President Trump has done more to address their concerns than any Democratic president ever achieved.”

According to Alden, another win for labor unions is that the deal limits the so-called investor-state dispute settlement (ISDS) provisions of NAFTA. ISDS allowed multinationals to sue states that issue new regulations that affect their operations. According to critics, ISDS has been used to challenge workplace protections. Conservatives have also criticized it for challenging U.S. sovereignty.

Correction: A previous version of this article published on March 27, incorrectly stated who launched a television and digital advertising campaign. This was done by the Pass USMCA Coalition. The Epoch Times regrets the error.