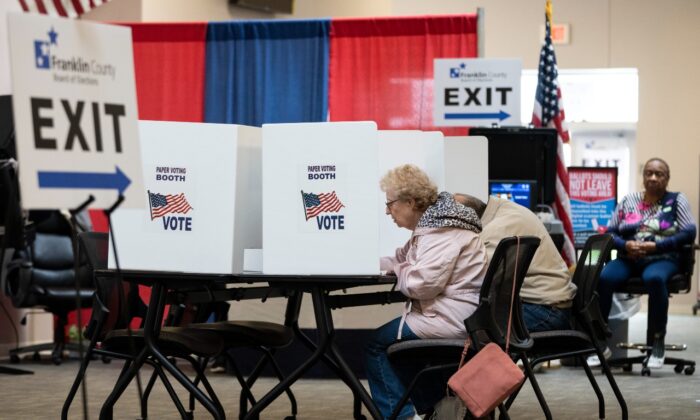 File photo: Voters use an optional paper ballot voting booth as they cast their ballots early for the May 3 Primary Election at the Franklin County Board of Elections polling location on April 26, 2022 in Columbus, Ohio. (Drew Angerer/Getty Images)
2022 Midterm Elections

U.S. relations with China are an issue that increasingly commands the attention of voters, who are likely to cast their ballots in the November midterm elections largely on the basis of which candidates are toughest on China, experts say. But the same experts do not always agree as to whether jobs and trade, or national security, is the most important piece of the U.S.-China puzzle.

“In general, I think China will be kind of like background music throughout the entire campaign coming up in the fall. It has been before and will be again. Certainly this year, with Republicans up in the polls and being identified with the Trumpian attitude toward China, we’re going to see a need for every candidate to set himself or herself up as tough on China,” said Douglas H. Paal, a distinguished fellow of the Asia Program at the Carnegie Endowment for International Peace in Washington.

The question of China’s importance in the November midterms was the subject of a Wall Street Journal article on May 2 which compared the number of times that leading Democratic and Republican candidates in some of the most closely primary contests—those in Ohio and Pennsylvania—have made reference to China in their campaign ads. Leading the pack is Trump-backed Mehmet Oz, who has enjoyed a modest lead in polls against former hedge fund CEO David McCormick as they compete for the nomination to run for the Senate seat currently held by Pennsylvania Sen. Pat Toomey, who is retiring. The primary election will take place on May 17.

As of May 2, Oz had mentioned China 8,351 times in his ads, significantly more than the next-highest candidate ranked in this category, Tim Ryan of Ohio, who had made reference to China 3,417 times, the Journal reported.

As Oz’s thin lead in the polls indicates, endorsement by Trump is not, by itself, a guarantee of overwhelming support from Republican voters, and the extent of Trump’s continuing influence within the party is the subject of some controversy. Candidates who want an edge with the voting public in the primaries and the midterms need to make clear that they are well attuned to the issue—China’s role in the world—that preoccupies millions of voters and especially those in middle American states hit hard by overseas competition, experts say.

The message of many candidates may focus heavily on economic and trade issues. But for some observers, the economic populism of candidates catering to voters who have lost jobs or fear losing jobs to overseas competition may be missing the point, given the extremely serious foreign policy and national security concerns of an Asia-Pacific region where Beijing’s expansionist aims stir continual uncertainty.

Although taking a firm stand on China may be a tendency often associated with the Trump wing of the GOP, that does not mean that activism around the issue will be mostly limited to the Republican side.

President Joe Biden plans to visit Asia from May 20 to 24, and in preparation for the trip, he is likely to make a case that Democrats are tough on China issues, said Paal.

Lawmakers on both sides of the aisle, such as Rep. Steve Chabot (R-Ohio) and Rep. Ami Bera (D-Calif.), have cautioned strongly against complacency in a world where Vladimir Putin’s invasion of Ukraine may have emboldened other aggressors and the United States remains heavily dependent on China for rare earth minerals such as cobalt and lithium.

The self-governed island of Taiwan, which Beijing has repeatedly threatened to unite with mainland China, by force if necessary, does not really have a broad choice when it comes to political leaders in the United States, he said.

“History dealt Taiwan a tough hand. They will always do their best to cooperate with the prevailing administration of either party in Washington,” Paal observed.

But Paal said he does not consider an invasion of Taiwan to be likely to happen tomorrow, what with the 20th Congress of the Chinese Communist Party (CCP) coming up in the fall and the manifold preparations this much-anticipated event requires. Nor does Paal believe that Beijing is yet in a position to try to use nuclear blackmail to advance its territorial aims.

“They’re building [armaments] like crazy to put themselves in a more equal position, but they’re not there yet, they’re still constructing. They’re not being presented with opportunities too good to resist right now,” Paal said.

Nor can Beijing afford to ignore the steep consequences of the massive sanctions levied against Moscow, its banks, and its oligarchs in the wake of Russian leader Vladimir Putin’s Feb. 24 invasion.

“China has to look at their own potential shortcoming, and they have to look at the consequences of economic sanctions. There are lots of reasons why, in my view, Beijing ought to be more reluctant to think about using military force against Taiwan after the invasion of Ukraine than they were before,” Paal said.

But the long-term threat remains. In this scenario, opportunities exist for those politicians and candidates who can make a point of promoting strategies to lessen U.S. dependence on China, such as in raw earth minerals.

“Research and development are leading to new substitutes so we don’t have to have the kind of dependency on the things we’re getting from China” that has long characterized the trade relationship, Paal said. It is possible to develop alternate sources, following the example of Japanese manufacturers who are striving to find new ways to source the raw materials for microelectronics and cell phones, he continued.

Other experts acknowledge the importance of Taiwan and other foreign policy concerns but affirm the wisdom of candidates focusing on trade and jobs and tailoring their campaign strategies accordingly, especially in the hard-hit rustbelt states.

“Clearly, being tough on China is likely to be a litmus test in elections across the country, particularly on the Republican side. We are at a point in time when the Republican Party, in particular, and most national security professionals in the U.S. view China as a strategic competitor, and anyone who appears not to sufficiently share that concern is going to be questioned,” said Clete Willems, a partner at the law firm Akin Gump and Special Assistant to the President for International Trade, Investment, and Development during the Trump administration.

The paramountcy of the trade issue is not going away, in Willems’s view. While some people in Washington, including former Trump officials, view any modification of the tariffs that Trump imposed on China as a betrayal of that president’s legacy, Willems believes it is imperative to look at how those tariffs have played out over the last few years. Trump-era tariffs remain in place on more than $300 billion of Chinese goods. Some may have hurt China but others have hurt U.S. competitiveness, he argued. Candidates in the midterms cannot afford to ignore this reality.

“You have to modify the tariffs, and not modifying them is not going to be an effective China strategy. Let’s be smart about how we’re tough on China,” Willems said.

Willems said that addressing abusive Chinese practices, and in particular Beijing’s failure to adhere to the “phase one” trade deal that is part of Trump’s legacy, will be a top campaign issue for Republicans. He expressed doubt that Democrats will be able to capitalize as successfully on this issue.

“I think President Biden and the Democrats have huge headwinds due to inflation, mismanagement of the economy, and foreign policy problems, including in Afghanistan. I think they’ve failed to deliver on much of their agenda, and that’s the bigger issue,” he said.

Stephen Ezell, Vice President of Global Innovation Policy at the Information Technology and Innovation Foundation, a Washington-based think tank, said it makes sense that many campaigners have focused to such an extent on China.

“The United States lost as many as a million manufacturing jobs over the past decade as a result of trade with China. Clearly, that has hit the industrial Midwest the hardest. Those issues are going to find a more receptive audience there,” he said.

Ezell differs slightly from other experts as to which specific China topic will be of primary concern to voters this election season.

“When it comes to China as an issue, it’s going to have a lot more salience from an economic than a national security perspective,” he said. “This could change, obviously, if something were to happen in Taiwan.”