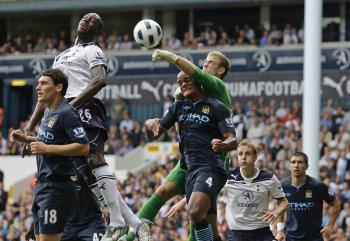 James Poulter
View profile
Follow
biggersmaller
Print
LONDON—The principal beneficiary of this riveting but scoreless draw will be England manager Fabio Capello. Twenty-three-year-old Joe Hart, chosen in goal for Manchester City over the vastly more experienced and hugely respected Shay Given, was a revelation. He will most likely become England’s No. 1 goalkeeper for many years to come.

Indisputably the man-of-the-match with a string of fine saves, particularly in the first half, he was the only factor preventing a deluge of Tottenham goals.

Billed as something of a grudge match, with the corresponding fixture at Eastlands last season cementing Spurs’ place in the Champions League at the expense of Roberto Mancini’s City, for the first 45 minutes, there was only one team in the game.

Tottenham Hotspur were fast, direct, and imaginative. In the first half alone, Joe Hart made four terrific saves. The first, originating from superb play by Aaron Lennon on the left, saw Peter Crouch rise well and nod down to Jermain Defoe, who struck the ball cleanly on the turn, forcing a spectacular instinctive reaction from Hart.

The second and third saves of distinction both came from long distance shots following corners, a beautifully controlled volley from Tom Huddlestone, and an awkward deflected strike from Benoit Assou-Ekotto.

The fourth saw a long ball played through to Defoe. Bursting into space he was foiled only by Hart advancing quickly to block the shot, and as the England striker went for the rebound, new City signing Aleksandar Kolarov was on hand to edge the ball away.

Bearing in mind that during this half, Gareth Bale, who was exceptional for large stretches of the game, not only hit the post after finally beating Hart, but also had a penalty claim turned down. That was the extent of Tottenham’s domination.

“I couldn’t have asked for more. Overall I thought it was a great performance from us, we were fantastic but we just couldn’t get the two extra points. But if we play like this all season we will be right up there,” said Spurs manager Harry Redknapp on the English Premier League website.

Carlos Tevez created some space in the opposing penalty area with neat footwork but failed to get a shot in—this was the extent of Man City’s openings before the break.

It was not surprising that Spurs failed to maintain their momentum in the second half, as Mancini’s side finally found some shape and even had a couple of attempts on goal. Shaun Wright-Phillips evaded Assou-Ekotto early on but took too long to shoot, and Tevez looked dangerous on 70 minutes with a deflected strike after good work by Adam Johnson on the right.

Yet Hart was soon called upon to make another great stop, this time from substitute Roman Pavlyuchenko after a swift Tottenham counter attack, and only a superb last ditch tackle from Vincent Kompany prevented the Russian from a further decent goal scoring opportunity 15 minutes later.

In the 83rd minute a clear cut chance fell to Bale who scuffed it somewhat with his less favored right boot. At this point you sensed that it would not be the day for Harry Redknapp’s team, winners of last season’s coveted fourth place.

All of Man City’s outstanding players were defensive, with the possible exception of Tevez. As well as Hart’s heroics, center half pairing Kolo Toure and Kompany were very effective, with Nigel De Jong supporting them admirably from midfield.

“We need time because we have two or three new players. They have not played together for five or six matches so it was difficult for us but I think if we have time we can improve,” added Manchester City manager Roberto Mancini.

For Spurs, Bale was terrific. Firing in an endless stream of beautifully angled and weighted crosses and corners, it was not until the 70th minute that he first put in a poor cross. He also showed great ball control, and was not afraid to run at defenders down the left flank. With Lennon operating efficiently on the right, the side showed great width and balance.