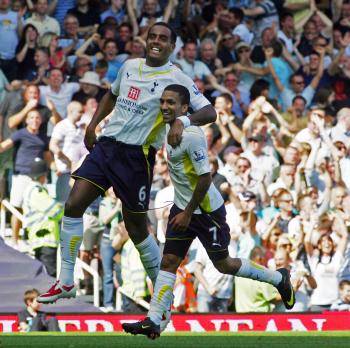 Harry Redknapp’s team is top of the table, based on having a better goal differential (six to five) than Chelsea. The Spurs manager who was also a former employee at Upton Park has had a perfect start to the season with three wins in three games.

Jermain Defoe leveled the score against his former club, as a strange backwards clearance from Cole came straight to him, before Aaron Lennon’s winner came with 11 minutes remaining.

Sunday’s other London derby saw Chelsea cruise past Fulham 2–0, leaving Carlo Ancelotti’s men in second place in the Premier League, as they too continued their perfect start to the season.

A first half goal from Didier Drogba and a second half score from Nicolas Anelka was all Chelsea needed. They missed many more opportunities.

One such missed opportunity was Michael Ballack’s free kick after 12 minutes from the edge of the penalty area, which he blasted over the bar. Fulham captain Danny Murphy must have been delighted to see that one go over, as he was responsible for giving the free kick away when he brought down Drogba.

Drogba was also involved in Chelsea’s second goal in the 76th minute. He fed Anelka and the France international strolled past Schwarzer to score his first goal of the new season.

Commenting on the Anelka-Drogba duo after the match Chelsea manager Carlo Ancelotti said, “They can play together because they have good, but different qualities. Anelka is very quick while Didier is stronger.

“They played very well today. They scored one and created the other.”

Another London team to do well this weekend was Arsenal, who crushed Portsmouth 4–1. Arsenal were cruising again after their first leg Champions League victory against Celtic last Tuesday.

Abou Diaby started off the London blitz with two first half goals. Portsmouth’s Younes Kaboul pulled one back but this seemed to only anger the Arsenal who then upped their game with scores from William Gallas and Aaron Ramsey in the second half.

Arsenal plays Manchester United this Saturday. United was also a big winner on Saturday—5–0 away to Wigan. Michael Owen scored his first goal for United and Wayne Rooney added a pair of goals.

Manchester City maintained their 100 per cent record with a 1–0 win over Wolves at the Eastlands Stadium. Emmanuel Adebayor was the only player to get his name on the score sheet in that fixture.

England’s version of Monday Night Football will feature Liverpool hosting Aston Villa. Liverpool has one win and one loss while Villa has one loss.