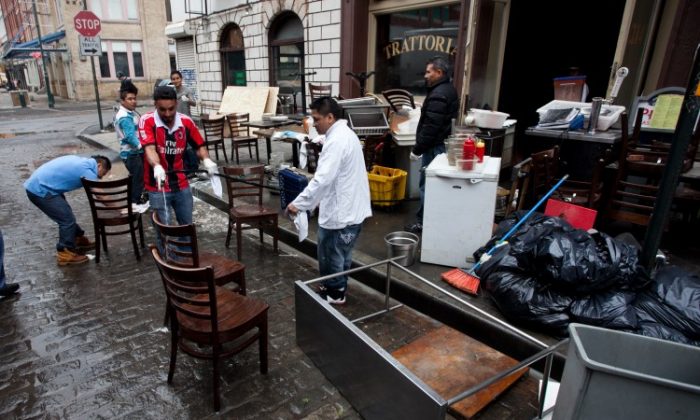 NEW YORK—Many Evacuation Zone A areas—low-lying ground such as Coney Island and the outer ring of Lower Manhattan—got hit hard by Hurricane Sandy.

Business owners and residents in the South Street Seaport area were spending a second day Wednesday recovering from heavy damage. Many restaurants and homes were completely flooded. Though water had mostly been drained, either through pumps or on its own, the damage was still very much a reality.

An emotional Sherry Delamarter, owner of the Sea-Horse at 259 Front Street, bid her workers goodbye as they finished a second day of cleanup. Damages from the “catastrophic” storm totaled half a million dollars, she estimated.

“Every bit of electrical equipment is breached, every piece of equipment is unsalvageable—every stool, chair, bench, décor item,” she said. “We basically have a shell of a building left.”

The drywall still has to be pulled down, because it would mold otherwise.

Groups of employees worked on cleaning out restaurants along Front Drive and Water Street. Piles of waterlogged materials and bags of things that were deemed unsalvageable were heaped on every street corner. Dumpsters were rented and wheelbarrows were used.

Meade’s Restaurant, at the corner of Peck Slip and Water Street, will have to order all new equipment, according to Manager Chano Morales.

Sung evacuated Monday, just before the storm, only because power was being shut down, she said. In a moment of irony, the area she briefly moved to, Tribeca, lost power.

Standing in front of the building she lives in on Oct. 31, Sung said the area needs help. Basements must all be dry before power can turn back on, according to Sung. She said the area is “ground zero” of the storm aftermath.

Bill Silver, who lives nearby at 248 Front St., had his home damaged by the flood. “It’s total destruction,” he said. Silver, whose wife and two children are currently staying in a hotel, was overseeing cleanup of his home Wednesday.

Hurricane Sandy was the most devastating storm New York has seen in a century.

“I don’t think I’ll see another one in my lifetime,” Silver said. He plans on moving back into his home despite the extensive damage.

The area faces a tough time repairing after the storm. Though business owners that The Epoch Times spoke to said they will reopen, not all will, according to Delamarter.

“The businesses down here will have to think if they’re going to come back or not,” she said. “You’ve got to ask yourself, would you?”