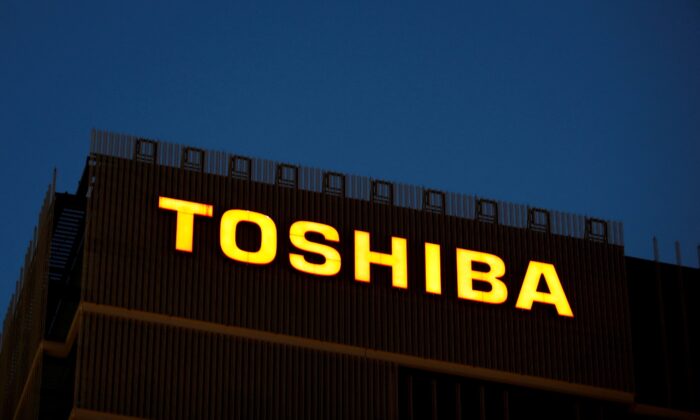 The logo of Toshiba Corp. is seen at the company's facility in Kawasaki, Japan, on June 10, 2021. (Kim Kyung-Hoon/Reuters)
Companies

Toshiba Corporation on Friday announced that it will build a new 300-millimeter wafer fabrication facility to increase its power semiconductor production capacity by March 2025.

A Toshiba spokesperson said the Japanese industrial conglomerate will invest around 100 billion yen ($873 million) in the new plant, on top of a 25 billion yen ($217 million) investment in a 300-millimeter fabrication line it is building at an existing chip plant.

The construction of a new wafer fabrication facility in Ishikawa Prefecture will take place in two phases, with the production start of Phase One scheduled for within fiscal 2024, according to the company’s statement.

Toshiba noted that Toshiba’s power semiconductor production capacity would be 2.5 times higher than in fiscal 2021 when the first phase of production reaches full capacity.

“The new fab will have a quake absorbing structure; enhanced BCP systems, including dual power supply lines, and the latest energy-saving manufacturing equipment to reduce environmental burdens,” the company said.

Vehicle electrification and the automation of industrial equipment are driving up the demand for power chips. The spokesperson said that the new plant could be expanded further with additional investment depending on demand.

Toshiba claimed that it has managed to meet growing chip demands by increasing production capacity on 200-millimeter lines and expediting the start of production on 300-millimeter production lines from the first half of fiscal 2023 to the second half of 2022.

“Decisions on the new fab’s overall capacity and equipment investment, the start of production, production capacity, and production plan will reflect market trends,” it added.

Toshiba announced earlier this year that it has partially restarted production at a semiconductor plant in Oita, southern Japan, which had been halted after a major earthquake struck the area.

The move came amid the global chip shortage, which caused output at Japan’s eight top automakers to fall by 49.7 percent last year, the sharpest production decline since the 61.8 percent dip in May 2020. Among them, Toyota and Honda dropped more than 55 percent.

Another Japanese multinational company, Nintendo, said on Thursday (pdf) that while its cumulative sales of Switch hardware have surpassed 100 million units, it noted that “the outlook for semiconductors and other components has remained uncertain” and “distribution delays remain unresolved.”

Anne Zhang, Ellen Wan, and Reuters contributed to this report.