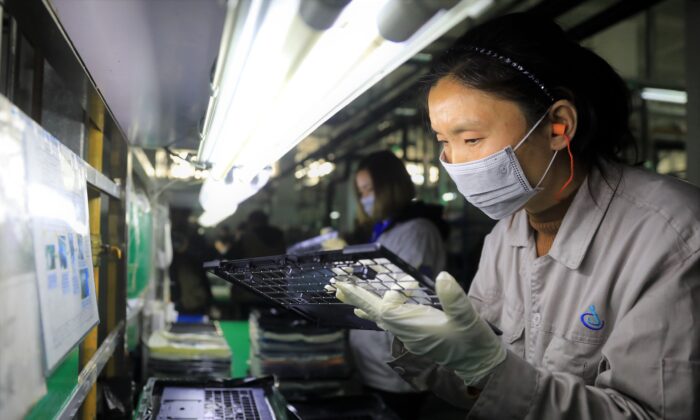 Workers inspect products at Toshiba's laptop factory in Lu 'an City, Anhui Province, China. The Japanese electronics giant will close its 30-year-old Dalian production base, a sign of its increasingly bleak future in the Chinese market. (STR/AFP via Getty Images)
China Business & Economy

Japanese electronics giant Toshiba is closing its factory in Dalian City after entering the Chinese market 30 years ago.

There are also online rumors that Toshiba will completely withdraw from China by closing 33 factories and R&D facilities in 24 Chinese cities by the end of this year.

Takagi, head of Toshiba’s media division in Japan, told The Epoch Times in a phone call on Sept. 10 that the company has decided to close its production base in Dalian at the end of September due to the reduced production range and a lack of new products.

The spokesperson evaded questions whether Toshiba will completely withdraw from China by the end of the year. However, a notice on Toshiba’s Chinese-language website, published on the same day, said that rumors of a complete withdrawal from China were false.

News of the Dalian factory closure began in May, according to Chinese media reports.

A video uploaded to Weibo on Sept. 3 revealed that Toshiba’s Dalian factory held a meeting attended by a thousand people on Aug. 31, formally informing employees of the factory’s official suspension at the end of September.

As one of the first Japanese companies to enter China, Toshiba first set up a wholly Japanese owned factory in Dalian in 1991 to make a wide range of products, including LCD televisions and medical equipment. At present, it mainly produces industrial motors and broadcast transmitters.

In the three fiscal years from 2012 to 2014 alone, Toshiba’s home appliance business suffered cumulative losses of 234.7 billion yen ($2.14 billion). The company has since embarked on a number of restructuring and plant closures in China.

In 2013, it already closed its LCD TV factory in Dalian.

In March 2016, Toshiba sold 80.1 percent of its home appliance business to Midea Group for $477 million, hoping to use Midea’s strength in the Chinese market to increase its own market share and launch new product lines.

Since the Covid-19 pandemic began last year, the Japanese government has offered incentives to bring overseas Japanese industries––mainly in China––back home, promising to pay all relocation costs. Toshiba also announced a number of restructuring, relocation, and sale plans, fueling rumors of its withdrawal from China.

A report by Netease, a Chinese web portal, on the closure of Toshiba’s Dalian factory, cited the “Toshiba Dalian (Communist) Party Committee” as a “model for party building” among foreign companies in Liaoning Province. It also named Wu Jianxin, the company’s party secretary, an “outstanding Communist Party member in Dalian.” In addition to his title as party secretary, Wu holds several de facto posts, including deputy general manager, head of general affairs, and head of the business division of Pioneer Park.

According to local media in Dalian, Wu joined Toshiba as a senior executive in 1992. The following year, he took the lead in setting up a Chinese Communist Party (CCP) branch at the instruction of the Dalian Development Area, but was opposed by Japanese executives based in the city who wanted him to concentrate on his job and not bring politics into corporate operation.

However, by 1997, Wu had written to Toshiba’s headquarters legal department and eventually gained approval.

In 2009, the company’s CCP membership had grown from the initial four to several hundred. Although there was a union, Wu continued to represent workers in pay negotiations with Toshiba. In June of this year, Wu was named “National Outstanding Party Affairs worker” by the CCP.