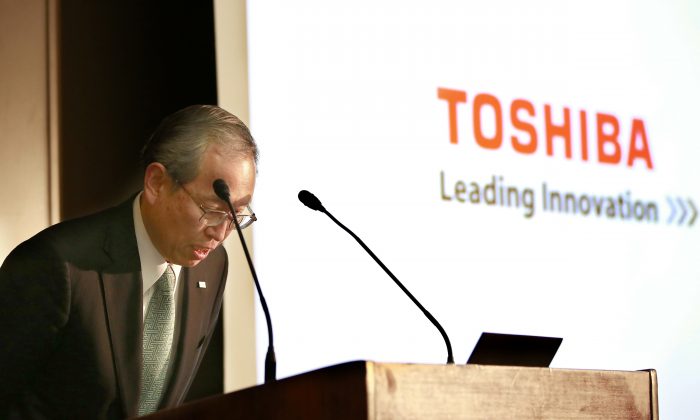 TOKYO—Japanese electronics and energy giant Toshiba Corp. said Tuesday that its chairman is resigning to take responsibility for problems that will result in a 713 billion yen ($6.3 billion) loss in its nuclear business.

Toshiba warned, however, that unaudited financial results it announced may change “by a wide margin.” It earlier delayed reporting its official financial results by a month, citing auditing problems related to the losses in its nuclear business. That sent Toshiba stock tumbling 8 percent in Tokyo trading.

The company said Shigenori Shiga, the chairman, will step down from the board but stay on as a Toshiba executive. He is quitting over huge losses from the acquisition of CB&I Stone & Webster by Toshiba’s U.S. nuclear unit, Westinghouse.

Toshiba said its net worth was in the negative, at minus 191 billion yen ($1.7 billion) at the end of last year, but the company hopes to fix that by the end of March.

Auditors questioned the company’s reporting on the acquisition of CB&I Stone & Webster. Toshiba denies any wrongdoing.

The company already was grappling, however, with a scandal over company officials’ doctoring accounting books to meet unrealistic profit targets.

Toshiba is expected to restructure its ailing nuclear business, but nothing has been announced. Japan’s nuclear sector was thrown into crisis after multiple meltdowns of reactors at a power plant in Fukushima prefecture triggered by the March 2011 earthquake and tsunami.

In its preliminary results, Toshiba said it anticipates a group net loss of 500 billion yen ($4.4 billion) for April-December of last year, including the 712.5 billion yen hit from its U.S. nuclear business.

The company is forecasting a group net loss of 390 billion yen ($3.43 billion) for the full year through March 31, instead of the 145 billion yen profit it had anticipated earlier.