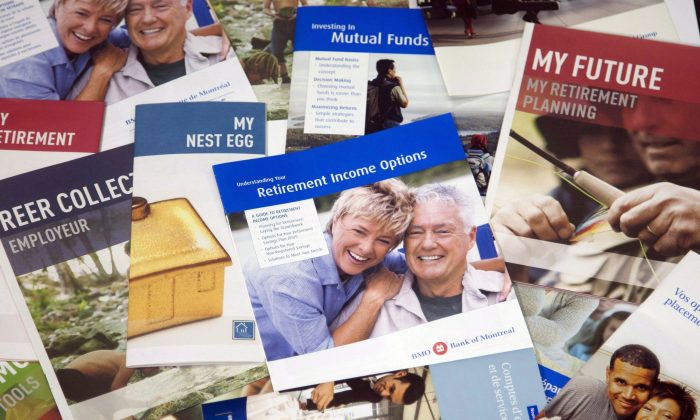 Brochures offering various retirement savings options. The Harper government says it’s considering giving Canadians the option of voluntarily hiking their contributions to the Canada Pension Plan, which would help them boost their retirement savings. The Liberals want a mandatory expansion of the CPP. (The Canadian Press/Ryan Remiorz)
Canada

OTTAWA—The federal Liberals want a mandatory expansion of the Canada Pension Plan, Justin Trudeau said Wednesday, May 27, as the Harper government’s abrupt pivot towards a voluntary increase in contributions continued to reverberate.

The Conservatives, long opposed to expanding the plan, made a 180-degree turn May 26 with a promise to explore allowing people to funnel more earnings into the program to expand their nest eggs.

The change appeared designed to wrest some ground away from the government’s rivals as parties battle for position on retirement income, already shaping up to be a central ballot-box issue in the October election.

Trudeau, acknowledging that the Liberals campaigned in 2011 on a voluntary increase, said a Liberal government in 2015 would introduce a mandatory CPP expansion similar to one proposed in Ontario.

“In conversations with the provinces and on reflection, we’ve realized that we actually need a full, proper expansion of the CPP,” Trudeau said.

“We’re looking at an expansion and a mandatory expansion of the CPP of the type that (Premier) Kathleen Wynne put forward in Ontario. She had said a number of times that she was desperately hoping that the federal government would show leadership on this.”

Any changes to the pension plan would require the support of seven provinces representing two-thirds of the country’s population.

Ontario passed legislation last month to create its own mandatory plan for those who don’t have a workplace pension—a program derided by critics, notably the federal Conservatives, as a “job-killing payroll tax.”

When asked to explain the change in the Liberal position, Trudeau refused, except to promise more information at a later date.

Both Trudeau and New Democrat Leader Tom Mulcair—who called the Conservative pivot a “last-minute conversion”—scoffed at the notion that the Tories intend to follow through.

“As you know, they’ve shut the door on that for the past nine and a half years,” said Mulcair, whose party has long called for a full mandatory expansion of the Canada Pension Plan.

A spokesman for Finance Minister Joe Oliver said the government sent letters about the proposal to each of the provinces earlier this week. The spokesman would not provide a copy of the letter or discuss its contents in detail.

Any changes to the pension plan would require the support of seven provinces representing two-thirds of the country’s population.

When he dropped his bombshell Tuesday in the House of Commons, Oliver provided few details about the proposal, which was not included in last month’s federal budget.

He did say its voluntary nature means it wouldn’t force Canadians to absorb a “job-killing, economy-destabilizing, pension-tax hike on employees and employers.”

The issue dominated the cut-and-thrust of question period Wednesday.

“Our government favours allowing a range of options for people so they can save. In fact, not only can they save, but they can actually reduce their taxes by saving,” said Prime Minister Stephen Harper.

The debate over voluntary and mandatory CPP enhancement is a contentious one—with seniors advocacy groups like CARP in support of the compulsory expansion and organizations like the Canadian Federation of Independent Business preferring the optional one.

University of Calgary tax-policy expert Jack Mintz said adding a voluntary component to the existing CPP could be tricky, especially if it’s in the form of defined benefits.

The problem with a voluntary supplement is that people don’t think they need the CPP because they expect to die younger, Mintz said. In fact, he said, people are living longer, which drives up the cost of the program.

“It’s hard to run on a voluntary basis,” Mintz said. “It’s why CPP is mandatory.”

Mintz said a voluntary CPP expansion could perhaps be based on defined contributions, an individual investment account similar to a registered retirement savings plan.

Rhys Kesselman, an economist at Simon Fraser University, said a voluntary expansion would not address the fact that many Canadians are not saving enough for retirement.

Defined contribution plans could put people at the mercy of the markets when they want to withdraw funds, Kesselman said. On the other hand, a mandatory plan would offer little flexibility, forcing some to save more than necessary, he added.